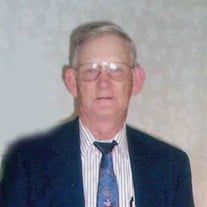 Aaron G. Carter, 77, of Bristol, Virginia went to be with the Lord, Sunday, September 2, 2018 at his residence in Bristol, Virginia. He was born in Pennington Gap, VA on March 17, 1941, a son of the late Fred P. and Pauline Bailey Carter. In addition to his parents, he was preceded in death by four brothers, James P. Carter, Samuel K.Carter, Paul Q. Carter and Gail W. Carter. Aaron was a resident of Bristol for many years. He was a Veteran of the U.S. Army and was stationed in Germany during the Vietnam War. He attained the rank of SGT E-5. During his time in the Army he received the National Defense Service Medal, Marksman (pistol), and Sharpshooter (rifle). Aaron was a loving husband, father and grandfather. He was a mechanic and truck driver for most of his life. He loved spending time with his family, shooting guns and shopping for tools he may never use. He was an active member and Deacon of Three Springs Baptist Church. Aaron is survived by his loving wife of 55 years, Juanita Cain Carter, one son, Jeffrey Alan Carter and wife, Misty of Bristol, TN; one daughter, Jennifer Elkins of Dryden, VA; five grandchildren, Mikayla Elkins, Matthew Elkins, and Jacob Elkins, all of Dryden, VA, and Timothy Carter and Tyler Carter of Bristol, TN; three brothers, R.T. Carter, Moran Carter, both of Pennington Gap, VA, and Clyde Carter of IN; two sisters, Virginia Wheeler and Carolyn Perkins, both of Pennington Gap, VA; and several nieces and nephews. The family would like to express a special thank you to Dr. Vickie Morgan, Bryan Kimberlin as well as the Staff of Ballad Hospice, for all the love and care shown to Aaron during his illness. The family will receive friends from 5:00 p.m. until 7:00 p.m., Tuesday, September 4, 2018 at Blevins Funeral & Cremation Services, 417 Lee St., Bristol, VA 24201. The funeral service will be conducted at 7:00 p.m., Tuesday, September 4, 2018 in Blevins Funeral & Cremation Services, with Pastor Mike Coonley officiating. The committal service and interment will be conducted at 11:00 a.m., Wednesday, September 5, 2018 in the Three Springs Baptist Church Cemetery, 7009 Reedy Creek Road, Bristol, VA 24202. Military Rites will be conducted by the Chapter 40 of the D.A.V., Bristol, VA and Virginia National Guard Honors Team. Pallbearers will be Family and Friends. Everyone is asked to meet at the cemetery at 10:50 a.m. Wednesday. In lieu of flowers, the family is requesting that donations be made to Three Springs Baptist Church. Condolences for the family may be sent and viewed by visiting www.BlevinsCares.com. Mr. Carter and his family are in the care of Blevins Funeral & Cremation Services.(276) 669-6141.

Aaron G. Carter, 77, of Bristol, Virginia went to be with the Lord, Sunday, September 2, 2018 at his residence in Bristol, Virginia. He was born in Pennington Gap, VA on March 17, 1941, a son of the late Fred P. and Pauline Bailey Carter. In... View Obituary & Service Information

The family of Aaron G. Carter created this Life Tributes page to make it easy to share your memories.

Send flowers to the Carter family.