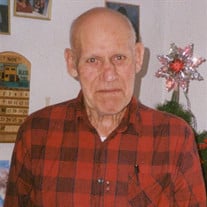 Albert D. Gorley, 96, of Bristol, Tennessee passed away Wednesday, June 24, 2015 at Cambridge House in Bristol, Tenn. He was born in Bristol, TN on March 29, 1919, a son of the late Sam and Jennie Hicks Gorley. In addition to his parents, he was preceded in death by his wife, Zella Green Gorley; two sons, Billy G. Gorley and James Gorley; six sisters; and five brothers. He was a loving father, grandfather, great grandfather, brother and husband. He loved farming, gardening and never met a stranger. Albert is survived by his daughters, Connie Leonard and husband Clay of Bristol, TN and Rosa May Russ of Abingdon, VA; sons, Howard Gorley of Bristol, TN, Johnny Gorley of Bristol, TN, and Ronnie Gorley and wife Sharon of Bristol, VA; brother, Willie Gorley of Bristol, TN; 14 grandchildren; 30 great grandchildren; six great great grandchildren; and several nieces and nephews. The family would like to express a special thank you to Albert's granddaughter, Pamela Jean Roberts and her husband Larry for all the love, support and care shown to her grandfather. Another special thank you goes to the staff of Cambridge House. The family will receive friends from 5:00 until 7:00 p.m. on Friday, June 26, 2015 at Blevins Funeral & Cremation Services, 417 Lee St., Bristol, VA. The funeral service will follow at 7:00 p.m. in the funeral home chapel with Brother Gordon Hughes officiating. The committal service and interment will be conducted at 12:00 p.m. on Saturday, June 27, 2015 at Glenwood Cemetery in Bristol, Tenn. Pallbearers will be Larry Roberts, Cody Roberts, Billy Roberts, Ron Leonard, Clay Leonard, and Johnny Lee Gorley. Honorary Pallbearers will be Aaron Gorley and Nathan Gibson. Those who wish to attend the graveside service are asked to meet at the funeral home chapel on Saturday at 11:30 a.m. to go in procession to the cemetery. In lieu of flowers, the family is requesting that donations be made to a charity of your choice.

Albert D. Gorley, 96, of Bristol, Tennessee passed away Wednesday, June 24, 2015 at Cambridge House in Bristol, Tenn. He was born in Bristol, TN on March 29, 1919, a son of the late Sam and Jennie Hicks Gorley. In addition to his parents, he... View Obituary & Service Information

The family of Albert D. Gorley created this Life Tributes page to make it easy to share your memories.

Send flowers to the Gorley family.