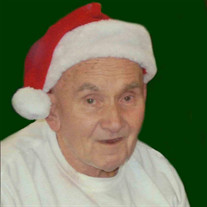 Psalm 34:18 "The Lord is close to the brokenhearted and saves those who are crushed in spirit." Albert Lee Shaffer, 77, of Bristol, VA passed away Sunday, November 18, 2018 at NHC Healthcare of Bristol. He was born in Bristol, VA on February 6, 1941, a son of the late Walter and Mary Bowman Shaffer. In addition to his parents, he was preceded in death by a sister, Lucille Shaffer. He attended Keys Street Pentecostal Church, was a father of six children, and was a hard worker. He had worked at Enterprise Fabricators and then worked at Bristol Metals for 21 years. He enjoyed smoking cigars, his pipe, and farm work. He liked to exercise and liked going on trips at the Slater and Douglas Centers. Of all of his activities, working at Bristol Metals was the thing that he loved the most. Albert is survived by his wife of 50 years, Linda Shaffer; four sons, Darrell Green and wife Elissa of Bluff City, TN, Rick Shaffer and fiancé Sondra Finch of Bristol, TN, Brian Shaffer and wife Carissa of Bristol, TN, and Adam Shaffer and wife Alyson of Bluff City, TN; two daughters, Saundra Booher and boyfriend Shane Dillow of Bluff City, TN and Heather Malloy and husband Vinny of Bristol, VA; 17 grandchildren; and three great grandchildren. The family would like to express a special thank you to the staff at NHC, friends and family at Keys St. Pentecostal Church, and Caris Hospice for all the love and care shown to Albert during his illness. The family will receive friends from 5:00 until 7:00 p.m. Tuesday, November 20, 2018 at Blevins Funeral & Cremation Services, Bristol, VA. The funeral service will follow at 7:00 p.m. in the funeral home chapel with Brother Lyons Smith, Brother Thermon Chapman, and Brother Randy Powers officiating. The committal service and interment will be conducted at 1:00 p.m. Wednesday, November 21, 2018 at Glenwood Cemetery, Bristol, TN. Pallbearers will be Zach Shaffer, Adam Shaffer, Darrell Green, Bryce Malloy, Rick Shaffer, Vinny Malloy, and Brian Shaffer.

Psalm 34:18 "The Lord is close to the brokenhearted and saves those who are crushed in spirit." Albert Lee Shaffer, 77, of Bristol, VA passed away Sunday, November 18, 2018 at NHC Healthcare of Bristol. He was born in Bristol, VA on February... View Obituary & Service Information

The family of Albert Lee Shaffer created this Life Tributes page to make it easy to share your memories.

Psalm 34:18 &quot;The Lord is close to the brokenhearted and saves...

Send flowers to the Shaffer family.