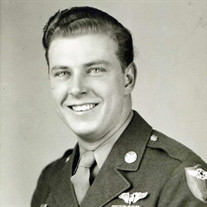 Arthur M. Bagnall, Jr., age 89, passed away peacefully on April 8, 2015. He was born in Baltimore, MD to Arthur M. Bagnall, Sr. and Mary Ellen Hook Bagnall, but was raised by his paternal aunt, Marie Holmes. Following graduation from Baltimore City College (HS), he enlisted in the U.S. Army Air Corp and served during WWII as a nose gunner and bombardier as part of the U.S. 8th Air Force stationed in North Pickenham England. After the war, he attended college on the GI Bill and received a Bachelor of Science degree in Business Management from The University of Baltimore. In 1965 he moved his family to Bristol, VA where he accepted a position with the Sperry Farragut Company (later Sperry Rand, Univac, and Unisys), and where he worked in the Purchasing Department until his retirement in 1987. On January 1, 2000 he married a second time, this time to his childhood sweetheart, and moved to Catonsville, MD where he resided until his death. Art was a member of State Street United Methodist Church in Bristol, VA where he had previously served as Sunday School Supervisor; he was a Past President of the Bristol Evening Lions Club; and was active for many years in the Veterans of Foreign Wars Post No. 219, in Catonsville, MD. Art loved to travel and was proud to say that he had visited all seven continents. Art was preceded in death by his first wife, Barbara Grace Almony Bagnall. He is survived by his current wife, Ruth W. Bagnall of the Charlestown Retirement Community in Catonsville, MD; one daughter, Lynn A. Bagnall and special friend Keith Farmer of Bristol, VA; two sons, Arthur M. Bagnall, III and wife Amy and Gary A. Bagnall and wife Robin all of Bristol VA; three grandchildren, Seth C. Bagnall, Kirk S. Bagnall, and Carter Grace Bagnall all of Bristol, VA; and one niece, Elizabeth Robitaille Hyslop of Portland, OR. A funeral service will be held at Our Lady of the Angels Chapel at Charlestown Retirement Community in Catonsville, MD at 11:00 am on Thursday, April 16, 2015 with Reverend Gary C. Hajek officiating. An interment service will be held at Forest Hills Memory Gardens Mausoleum in Abingdon, VA at 6:00 pm on Tuesday, April 21, 2015 with Reverend W. Joe Wall, Jr. officiating. The family will receive friends from 5:15 pm to 6:00 pm prior to the service in Abingdon. In lieu of flowers, the family requests that memorial donations be made to State Street United Methodist Church, 300 West Valley Drive, Bristol, VA 24201.

The family of Arthur MacNamee (Art) Bagnall Jr. created this Life Tributes page to make it easy to share your memories.

Send flowers to the Bagnall family.