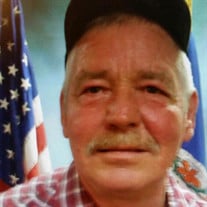 Barney Lyman Shumate, 66, died May 29, 2019 at his home in Bristol, VA. Barney was the son of the late Barney L. Shumate, Sr and Martha Eleanor Davis Shumate. Barney was born in Bristol and was a past employee of the City of Bristol, VA. For the past 30+ years Barney was a fixture at the Bristol Virginia Sheriff’s Office, spending his time between delivering mail in the Courthouse, making coffee, playing practical jokes on his many friends there and taking an occasional cigarette break. Barney loved, and was loved by, lots of people including his many special friends from Leisure Park Towers, the police departments and fire departments of both sides of Bristol, the staff at the Bristol Virginia Courthouse, and especially his family at the Bristol Virginia Sheriff’s Office. Barney’s life was made special by all the friends he had, past and present. He was a man of few wants and needs, and could usually be found with a smile on his face. He was happy, content, and would tell everyone that tried to get him to stop smoking, “If I die today, I die happy” and he actually meant it. If only we could all feel that way about our lives. He was also fond of hot dogs with chili and onions, potted meat, Busch beer, bologna, Coke, shirts with snaps (usually a size too small) and cornbread, but coffee and cigarettes were his all-time favorites. You would rarely see him without his hat, covered with the many pins given to him by his friends, and he cherished every single one. He also loved to play the lottery, collecting pawn shop bling, and listening to his police, fire and EMS friends on the scanner, which was usually going 24/7. He was also a fan of NASCAR, especially #18 Kyle Busch, and could often be seen sporting a NASCAR t-shirt under his flannel shirts with the snaps. You just couldn’t look too long for fear of one of the snaps popping off from the strain and putting your eye out. He also liked pro-wrestling and his favorite TV shows included the Price is Right and the Young and the Restless. Per his wishes, Barney’s remains were cremated and his ashes will remain with his adopted momma, Pam. As he was fond of saying, “Ashes to ashes, dust to dust.” Barney was very guarded about certain aspects of his past, leaving us to speculate on who amongst his family may still be living and what their relationship was to him. We would hope they would all join his many friends and adopted family in celebrating his life on Saturday June 8th, 2019 beginning at 6pm in Cumberland Square Park, downtown next to the Bristol Virginia Courthouse at the corner of Lee and Cumberland. Per Barney’s desires, we will eat some hot dogs with chili and onions, drink some Cokes or coffee, and share our stories of all the great times and fond memories. Condolences for the family may be sent and viewed by visiting www.BlevinsCares.com. Mr. Shumate and his family are in the care of Blevins Funeral & Cremation Services.(276) 669-6141.

Barney Lyman Shumate, 66, died May 29, 2019 at his home in Bristol, VA. Barney was the son of the late Barney L. Shumate, Sr and Martha Eleanor Davis Shumate. Barney was born in Bristol and was a past employee of the City of Bristol, VA.... View Obituary & Service Information

The family of Barney Lyman Shumate Jr. created this Life Tributes page to make it easy to share your memories.

Send flowers to the Shumate family.