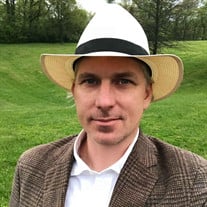 Ben Collins Ben Collins left us all too soon Saturday, May 12th. Ben was a frequent player of Magic: The Gathering, often joining his friends for Friday Night Magic at MWO Games. He loved playing online games, podcasting, creating music, collecting vinyl, and gardening, and was never one to miss exploring outdoors or looking for new adventures. Ben treasured spending time with his family and friends, especially his son, Gannon. We’ve been told he was a fine YouTube DJ, too. Ben was born in Tampa, Florida, and graduated from Florida State High School. He attended Florida State University and UNC Asheville. You could often find him in garnet and gold, cheering for his faves, the Florida State Seminoles. Ben moved to the Tri-Cities with his family in the early 1990s. It is here that he pursued his career in digital media and marketing. He and his wife, Cam, launched their first small business, Spirit Guardian, in 2003, later merging with Bristol firm Graphic Bliss (later shortened to simply Bliss). Ben worked at L.C. King Mfg. Co. from 2012-2014, where he used his creative vision and photography skills to help rebrand L.C. King and the company’s iconic label, Pointer Brand. Ben loved working at L.C. King, and the many friends he made during his tenure there, but in January 2015, he could not resist the entrepreneurial urge, and returned to partner with Cam at Camellia Digital Agency. Ben served on the board of Believe in Bristol for several years, working to help other local entrepreneurs in Downtown Bristol. As part of that work, he chaired the committee for BiB’s Entrepreneur Grants Program. This began as a small “shark tank” style prize, in which downtown entrepreneurs presented their pitch to a panel of judges for the opportunity to win a $5,000 prize. Ben helped grow this into a $60,000+ program. Through the program, Ben mentored downtown businesses such as Bristol Station Brews & Taproom, Elderbrew, and Bloom Cafe & Listening Room. Ben also served on the board of Art in Public Places and has worked with and supported numerous other local non-profits such as Barter Theatre, PUSH! Film Festival, Margaret B. Mitchell Spay-Neuter Clinic, The Crisis Center, Tennesseans for the Arts, KOSBE: The Small Business Connection, Appalachian Sustainable Development, Birthplace of Country Music, and others. He was a member of the Friends of Steele Creek, and a regular donor to Big Cat Rescue, the Wikimedia Foundation, the Mozilla Foundation, the ACLU, and others. Ben is preceded in death by his beloved chocolate lab, Koto, and cats Sheba, Luna, and Sybil. Loving him always are his beloved wife, Cam and son, Gannon; mother, Dr. Marcia Harris; father, John Ghra and his wife Paige Ghra; brother, Ian Harris; sisters, Fiona Harris and Jessica Swihart; dogs, Veela, Lupa and Loki; cats, Simon, Fae, Brightcat, Merlin, Sya, and Meme; and dear friends too numerous to count. Please join us in celebrating Ben at 2:00 p.m. Wednesday, May 16, 2018 at Blevins Funeral & Cremation Services, 417 Lee St., Bristol, VA. The burial will be held 2:00 p.m. Thursday, May 17, 2018 at Green Hills Cemetery, 25 N. Leicester Hwy., Asheville, NC 28806. In lieu of flowers, please send donations to Paramount Bristol, where he is remembered as a visionary designer and creative spirit full of good heartedness and a unique sense of adventure. Ben will be missed beyond measure.

The family of Ben Collins created this Life Tributes page to make it easy to share your memories.

Ben Collins left us all too soon Saturday, May...

Send flowers to the Collins family.