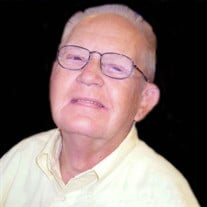 Bill Keith, age 84, of Bristol, Virginia went to be with the Lord on Friday, June 16, 2017 at Lakebridge in Johnson City, TN. Bill was a U.S. Army veteran during the Korean Conflict. He started work at Massengill Laboratories and retired from Glaxo Smith Kline Laboratories. Bill was a faithful member of Antioch Baptist Church where he served as an usher and sang in the choir. He loved to fish, hunt, and ride his bike. Bill was preceded in death by his parents, Odie and Ruth Keith; his wife, Janet Carolyn Cowan Keith; and two sisters, Lillian Leonard and Dondra Wright. He is survived by a daughter, Cathy, and grandson, Tyler; two sisters, Aileen Hill and Diane Sharret both of Bristol; his sister-in-law, Becky Hammer; brothers-in-law, Marvin Sharret, Norman Cowan and his wife, Shirley, and Glen Cowan; special nieces very close to his heart, Sherry Cox-Nutter, Tracy Trigg, Hannah Cox, and Elizabeth Grace Trigg; and nephew, Carter; and several other nieces and nephews. The family will receive friends from 6:00 PM until 7:30 PM Monday, June 19, 2017 at Blevins Funeral and Cremation Services. The funeral service will follow at 7:30 PM Monday at the funeral home with Pastor Brad Davis officiating. The committal service and interment will be conducted at 2:00 PM Tuesday, June 20, 2017 at Glenwood Cemetery, Bristol, TN with military graveside rites by U.S. Army National Guard Honor Guard and Chapter 40 of the D.A.V., Bristol, VA. Pallbearers will be selected from friends at Antioch Baptist Church. In lieu of flowers, the family is requesting that donations be made to St. Jude Children's Research Hospital, 262 Danny Thomas Place, Memphis, TN 38105. Condolences for the family may be sent and viewed by visiting www.BlevinsCares.com. Mr. Keith and his family are in the care of Blevins Funeral & Cremation Services. ph.#: (276) 669-6141.

Bill Keith, age 84, of Bristol, Virginia went to be with the Lord on Friday, June 16, 2017 at Lakebridge in Johnson City, TN. Bill was a U.S. Army veteran during the Korean Conflict. He started work at Massengill Laboratories and retired from... View Obituary & Service Information

The family of Billy W. Keith created this Life Tributes page to make it easy to share your memories.

Send flowers to the Keith family.