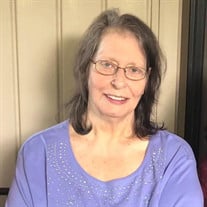 Brenda Kay Cole Billings, 66, of Bristol, VA passed away on Tuesday, May 25th, 2021 in the Bristol Regional Medical Center, Bristol, TN following an extended illness. She was born in Jefferson, NC on August 20th, 1954, a daughter of the late John Junior Cole and Mavis Church Cole. In addition to her parents, she was preceded in death by her maternal grandparents, Reeves Church and Elsie Church. Brenda was a loving and caring mother, grandmother, great grandmother, sister, aunt, cousin and friend. She was of the Baptist faith and loved the Lord. Throughout her life, she was considered as a jack of all trades and seemingly able to fix everything being very capable to prove her independence. Her role as a homemaker was crucial to her children's upbringing as she loved each of them very dearly. Brenda was also someone to look to for advice with all of her many wisdoms and experiences. She had many interests including carpentry, gardening, canning, reading, camping, fishing, and shopping for antiques. Brenda is survived by one son, James Thomas Cole and wife Jessica of Bristol, VA; two daughters, Angela Dawn Lawrence and husband Billy of Crumpler, NC and Marsha Gail Marley and husband Terry of Kingsport, TN; two brothers, Tommy Cole and wife Joann of Crumpler, NC and David Cole of West Jefferson, NC; two sisters, Linda Hurley of West Jefferson, NC and Judy Hess of West Jefferson, NC; eight grandchildren, eight great-grandchildren and several nieces and nephews. The family would like to express a special thank you to the nurses and staff of ICU #3 of Bristol Regional Medical Center for all the love and care shown to Brenda during the past few weeks. A private Celebration of Life service will be held in the coming days. Condolences for the family may be sent and viewed by visiting www.BlevinsCares.com. Ms. Billings and her family are in the care of Blevins Funeral & Cremation Services, 417 Lee St., Bristol, VA 24201; ph.#: (276) 669-6141.

Brenda Kay Cole Billings, 66, of Bristol, VA passed away on Tuesday, May 25th, 2021 in the Bristol Regional Medical Center, Bristol, TN following an extended illness. She was born in Jefferson, NC on August 20th, 1954, a daughter of the late... View Obituary & Service Information

The family of Brenda Kay Cole Billings created this Life Tributes page to make it easy to share your memories.

Send flowers to the Billings family.