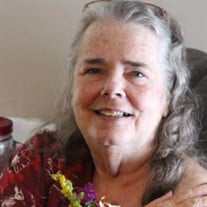 Bridghet Rose Fisher, 71, of Bristol, VA passed away on Friday, January 8, 2021 in the Ballad Hospice House, Bristol, TN following an extended illness. She was born in Philadelphia, PA on November 29, 1949, a daughter of the late William J. Golden and Margaret Hester Mace Golden. In addition to her parents, she was preceded in death by one brother, William J. Golden Jr. Bridghet was a loving wife, mother, sister, grandmother and aunt. She spent most of her life living in Pennsylvania, spent the last twenty years living in Hawaii and had moved to the Bristol area just recently. She had many jobs throughout her life but the most notable ones was her service as a crossing guard for the Hawaii Police Department, and being the first female postal carrier in Langhorne, PA. Bridghet loved animals and spending time with her friends and family. Bridghet is survived by her loving husband of 50 years, Robert A. Fisher Sr.; five sons, Robert A. Fisher Jr. and wife Rita of Churchville, PA, John Frederick Fisher and wife Kimberly of Levittown, PA, Paul William Fisher and fiance Guy of San Diego, CA, Patrick James Fisher of Philadelphia, PA, Christopher David Fisher and wife Taryn of Bristol, VA; three daughters, Tabetha Kimberly Ann Guindon and husband John of Warminster, PA, Heather Margaret Rose and fiance Carlos of Levittown, PA, Bridghet Elizabeth Sarah Fisher Donato of Dublin, OH; one sister, Margaret Hester Byrnes and husband Brian of Mishawaka, IN; fifteen grandchildren and several nieces and nephews. The family would like to express a special thank you to the nurses and staff of both Ballad Hospice House and Bristol Regional Medical Center for all the love and care shown to Bridghet the last few months. "God, grant me the serenity to accept the things I cannot change, courage to change the things I can, and wisdom to know the difference." There are no services planned at this time. In lieu of flowers, the family is requesting that donations be made out to your own personal choice of a charity. Condolences for the family may be sent and viewed by visiting www.BlevinsCares.com. Mrs. Fisher and her family are in the care of Blevins Funeral & Cremation Services, 417 Lee St., Bristol, VA 24201; ph.#: (276) 669-6141.

Bridghet Rose Fisher, 71, of Bristol, VA passed away on Friday, January 8, 2021 in the Ballad Hospice House, Bristol, TN following an extended illness. She was born in Philadelphia, PA on November 29, 1949, a daughter of the late William J.... View Obituary & Service Information

The family of Bridghet Rose Fisher created this Life Tributes page to make it easy to share your memories.

Bridghet Rose Fisher, 71, of Bristol, VA passed away on Friday,...

Send flowers to the Fisher family.