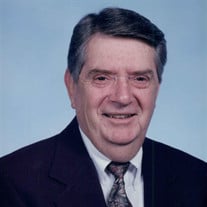 "We are confident, I say, and willing rather to be absent from the body, and to be present with the Lord" 2 Corinthians 5:8 Cecil G. Mumpower, 82, of Bristol, VA passed away Monday, March 26, 2018 at Bristol Regional Medical Center. He was born in Bristol, VA on May 11, 1935, a son of the late Cody and Lucy Pridemore Mumpower. In addition to his parents, he was preceded in death by a brother-in-law, Ed Whitaker and a niece, Julie Morton. He was a member, deacon and music leader at Scenic Park Baptist Church. He had retired from L.M. Berry after 32 years, served his country in the United States Army, and was a member of the Sixth United States Army Honor Guard at the Presidio in San Francisco, CA. His hobbies included golf, fishing and watching baseball. He loved going to his grandchildren's activities and watching them play. Cecil is survived by his wife of 60 years, Sue Mumpower, son, Jayson Mumpower and wife Jackie of Kingsport, TN; daughter, Jill Triplett and husband Kevin of Bristol, TN; three grandchildren, Lucas Triplett, Ryan Mumpower, and Sarah Grace Triplett; brother, Robert "Bob" Mumpower and wife Shirley of Bristol, VA; sisters, Maxine Whitaker of Bristol, VA and Landa Fritz and husband Butch of Appalachia, VA; and several nieces and nephews. The family would like to extend a special thank you to the ICU staff at Bristol Regional Medical Center and to the staff at Advanced Home Healthcare for their excellent care. The family will receive friends from 6:00 until 8:00 p.m. Wednesday, March 28, 2018 at Blevins Funeral & Cremation Services, 417 Lee St., Bristol, VA. The funeral service will follow at 8:00 p.m. in the funeral home chapel with Pastor Ron Gilbert officiating. The committal service and entombment will be conducted at 2:00 p.m. Thursday, March 29, 2018 at Mountain View Cemetery, Bristol, VA. Pallbearers will be Shayne Crenshaw, Ron Kirk, Mike Mumpower, Henry Palmer, D.C. Dishner, Fred Bridwell, and Don Mumpower, Sr. In lieu of flowers, the family is requesting that donations be made to Gideons International Processing Center, P.O. Box 97251, Washington, DC 20090-7251.

"We are confident, I say, and willing rather to be absent from the body, and to be present with the Lord" 2 Corinthians 5:8 Cecil G. Mumpower, 82, of Bristol, VA passed away Monday, March 26, 2018 at Bristol Regional Medical Center. He was... View Obituary & Service Information

The family of Cecil G. Mumpower created this Life Tributes page to make it easy to share your memories.

&quot;We are confident, I say, and willing rather to be absent from...

Send flowers to the Mumpower family.