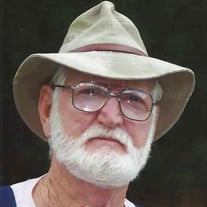 "To be absent from the body is to be present with the Lord" 2 Corinthians 5:8 Charles Louis Phillips, 82, of Bristol, TN passed away Sunday, June 26, 2016 at Bristol Regional Medical Center. He was born in Scott County, VA on June 22, 1934, a son of the late Charles Cogle Phillips and Dixie Bryant Phillips. In addition to his parents, he was preceded in death by a son, Jackie Phillips and five brothers, John, Roger, Harold, Dewey, and Bob Phillips. He was a retired employee of the City of Bristol, TN after 30+ years. He loved hunting, fishing and the Tennesse Vols. Charles is survived by his wife, Mary "Toots" Phillips; daughter, Penny Edson and husband Alan of Bristol, VA; son: Virgil Keith Phillips and wife Amanda of Bluefield, VA; sisters, Gloria Mullins and husband Curtis of Big Stone Gap, VA, Brenda Wells and husband Wilbur of Amelia Courthouse, VA, and Madeline King of Big Stone Gap, VA; three grandchildren, Harley Rice and fiance Jessica, Philip Makris and wife Brittany, and Lucas Phillips; three great grandchildren, Kenzie Rice, Kirsten Makris, and Caleb Makris; and several nieces and nephews. The family would like to express a special thank you to the nurses and doctors at Bristol Regional Medical Center for all the love and care shown to Charles during his illness. The family will receive friends from 6:00 until 8:00 p.m. on Wednesday June 29, 2016 at Blevins Funeral & Cremation Services, 417 Lee St., Bristol, VA. The funeral service will follow at 8:00 p.m. in the funeral home chapel with Reverend Curtis Mullins officiating. The committal service and interment will be conducted at 2:00 p.m. on Thursday, June 30, 2016 at Rooty Branch Cemetery, Bristol, TN. Pallbearers will be Mark Mullins, Roger Mullins, Harley Rice, Philip Makris, Wilbur Wells, and Earl Vestal. Honorary Pallbearers will be Stephen Mullins, Noel Wells, Robbie Phillips, Lonnie Phillips, and Frank Phelps. Military honors will be provided by United States Air Force Honor Guard and the Bristol VFW Post #6975. Those who wish to attend the graveside service are asked to meet at the funeral home chapel on Thursday at 1:15 p.m. to go in procession to the cemetery.

"To be absent from the body is to be present with the Lord" 2 Corinthians 5:8 Charles Louis Phillips, 82, of Bristol, TN passed away Sunday, June 26, 2016 at Bristol Regional Medical Center. He was born in Scott County, VA on June 22, 1934,... View Obituary & Service Information

The family of Charles Louis Phillips created this Life Tributes page to make it easy to share your memories.

&quot;To be absent from the body is to be present with the Lord&quot; 2...