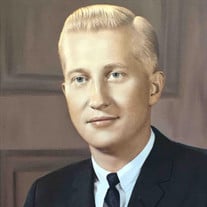 Charles Edward Wright, Jr., 80, of Lenoir, NC passed away on Thursday, October 20, 2016 at Caldwell Memorial Hospital UNC in Lenoir, NC. He was a native of Bristol, VA and was born on September 4, 1936, a son of the late C. Edward and June Hannum Wright. In addition to his parents, he was preceded in death by a son, Charles E. Wright, III. Mr. Wright was a graduate of Episcopal High School in Alexandria, VA and earned degrees from Georgia Institute of Technology in Mechanical Engineering and Vanderbilt University in Economics. Following his studies, Mr. Wright returned to Bristol to join the family business, J. Walter Wright Lumber Co. In 1968 he joined Equitable Securities in Nashville to pursue a career in investment banking. During his career he also worked for Robinson Humphrey and Kuhn Loeb in New York City. He retired in 2002 after a 24 year career with Merrill Lynch as a managing director. Charles is survived by his children, Carol Wright Carlson of Milwaukee, WI and William Miller Wright (Jill) of Lexington, KY; their mother, Susan Miller Wright of Ponte Vedra Beach, FL; a brother, James Hannum Wright (Kay); grandchildren, Charlie (Britt), Jim (Alyssa), Will, Lynn, Logan, and Carolyn; daughter-in-law, Margot; and a great grandson, Christian. The family wishes to extend a special thank you to his caretaker and companion in his last years, Teresa Burgett. The family will receive friends from 5:00 until 6:30 p.m. on Thursday, October 27, 2016 at Blevins Funeral & Cremation Services, 417 Lee St., Bristol, VA. The funeral service will follow at 6:30 p.m. in the funeral home chapel. The committal service and interment will be conducted at 10:30 a.m. on Friday, October 28, 2016 at Glenwood Cemetery, Bristol, TN. In lieu of flowers, the family is requesting that donation be sent to American Cancer Society, P.O. Box 22478, Oklahoma City, OK 73123 or American Heart Association, 4217 Park Place Ct., Glen Allen, VA 23060-9979.

Charles Edward Wright, Jr., 80, of Lenoir, NC passed away on Thursday, October 20, 2016 at Caldwell Memorial Hospital UNC in Lenoir, NC. He was a native of Bristol, VA and was born on September 4, 1936, a son of the late C. Edward and June... View Obituary & Service Information

The family of Charles Edward Wright Jr. created this Life Tributes page to make it easy to share your memories.

Send flowers to the Wright family.