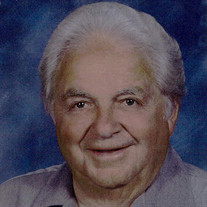 Clarence C. "Chuck" Reynolds, 90, of Bristol, Virginia passed away Tuesday, February 3, 2015 at Bristol Regional Medical Center. He was born in Tacoma, WA on January 25, 1925, a son of the late Charles Stephen Reynolds and Lucy Bonning Judd. In addition to his parents, he was preceded in death by an infant brother. He was in the Navy for four years and went to Aviation Metalsmith Trade School in Alameda, CA and attained the rank of Aviation Metalsmith Third Class (AM3/C). During Chuck's tour of service he served on the USS Breton and the USS Natoma Bay. He then went to a Carrier Aircraft Service Unit 33, to the South Pacific, and was transferred to ARU Navy 145 for Guadalcanal where he stayed for 12 months. After returning home, he was the owner of Valley Door and Window Company in San Diego and a square dance caller for many years. He was called "Yodeling Chuck Reynolds" because he interjected his calls with yodeling. He was a charter member of Our Lady Of Grace Catholic Church in El Cajon, CA and a member of their choir. Chuck was in the Navy when he met and married his first wife, Ruth Cuddigan on February 16, 1946. Ruth passed away in 2005. They had five children, Marylee, Renee, Steve, John (Jack), and Robert (Rocky). Chuck was presently living in Bristol, VA with his second wife, Carol Owen Grayson Reynolds. Carol has three children, Shane Michael Grayson, John Scott Grayson, and Connie Grayson Criswell and husband John; one daughter-in-law, Hella Grayson; 14 grandchildren; and nine great grandchildren. Chuck and Carol attended church at St. Anne Catholic Church, belonged to the Friendship Club, attended live theatre and the symphony, exercised at the church, enjoyed eating out, had friends in for dinner, traveled, and Chuck was a member of Knights of Columbus. The family will receive friends at 10:00 am on Saturday, February 7, 2015 at St. Anne Catholic Church. A funeral mass will be celebrated at 11:00 am with Reverend Kevin Segerblom officiating with a reception to follow in the Commons. Inurnment will be held at a later date at Fort Rosecrans in San Diego, CA.

The family of Clarence C. "Chuck" Reynolds created this Life Tributes page to make it easy to share your memories.

Send flowers to the Reynolds family.