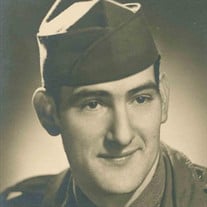 Clarence J. Mitchell, age 94, of Bristol, Virginia, went to heaven on Friday, January 19, 2018 at his home in Bristol, Virginia following an extended illness. He was born in Abingdon, Virginia on November 18, 1923, a son of the late Edward and Minnie Fern Mitchell. In addition to his parents, he was preceded in death by his wife, Maudie Lee Mitchell; five sisters, Edna Blackwell, Ora Self, Willie Bird Mitchell, Ruby Mitchell and Virgie Lowe; three brothers, Martin Mitchell, Von Mitchell and Frank "June" Mitchell. Clarence was a resident of Bristol for many years and was a World War II Veteran having served in the United States Army, TEC 4, where he received the Good Conduct Medal, American Theater Ribbon, European African Middle Eastern Theater Ribbon, and the WWII Victory Ribbon for combat duty. He was a member of LaRue County, Kentucky, Church of Christ. He was a Mechanic for many years in the Iron and Steel Industry working for the TVA and Bristol Steel. He was an avid Grouse and Turkey hunter and enjoyed repairing chainsaws and gardening. Clarence is survived by two sons, Marion and Janet Mitchell of Bristol, Virginia and Alan and Jerri Mitchell of Abingdon, Virginia; four grandchildren, Melissa Mitchell, Greg Mitchell, Beth Carmack and Ginny Flanary; and five great grandchildren. The family will receive friends from 6:00 p.m. to 8:00 p.m., Monday, January 22, 2018, at Blevins Funeral & Cremation Services, 417 Lee Street, Bristol, Virginia 24201. Friends may also call at the residence of Marion Mitchell, 8440 Caney Valley Rd., Bristol, VA anytime. Graveside Services will be conducted at 1:00 p.m., Tuesday, January 23, 2018 in Mountain Home National Cemetery, Mountain Home, Tennessee. Military Rites will be conducted by Chapter 40 of the D.A.V., Bristol, VA and the Army National Guard Honors Team. In lieu of flowers, the family is requesting that donations be made to the American Heart Association, 4217 Park Place Ct., Glen Allen, VA 23060-9979. Condolences for the family may be sent and viewed by visiting www.BlevinsCares.com. Mr. Mitchell and his family are in the care of Blevins Funeral & Cremation Services.(276) 669-6141.

Clarence J. Mitchell, age 94, of Bristol, Virginia, went to heaven on Friday, January 19, 2018 at his home in Bristol, Virginia following an extended illness. He was born in Abingdon, Virginia on November 18, 1923, a son of the late Edward and... View Obituary & Service Information

The family of Clarence J. Mitchell created this Life Tributes page to make it easy to share your memories.

Send flowers to the Mitchell family.