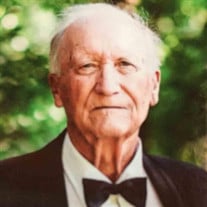 Clayton Dempster Leonard, 91, of Bristol, VA went to be with his Lord on Thursday, August 11, 2016 at Bristol Regional Medical Center. He was born in Washington County, VA on October 16, 1924, a son of the late Robert Clifton Leonard and Pearl Alice Fleenor Leonard. In addition to his parents, he was preceded in death by his wife of 58 years, Dorothy Branson Leonard; daughter, Cathy Leonard Anderson; sisters, Naomi Leonard Miller and Mary Leonard Bowers; and brothers, J.B. Leonard and Douglas Leonard. He was a life long resident of Washington County, VA and was retired from Virginia Heights Body Works and was a former employee of Enterprise Wheel and Car Company. He was a Master Mason and member of Valley Lodge No. 93 AF & AM of Benhams, VA where he served as a past Master and past District Deputy Grand Master of the 46th Masonic District. He was an active member of Kingsway Baptist Church. He loved hunting, fishing, golf and car shows. Clayton is survived by his daughter, Lynda Leonard Gentry of Lexington, KY; two grandchildren, Dana Gwyn Gentry Jackson and husband Chris and Christopher Carlton Gentry all of Lexington, KY; three great grandchildren, Ella, Ava, and Jake Jackson; two brothers, Willard Leonard and wife Jewel and Leslie Leonard and wife Francis all of Bristol, VA; and several nieces and nephews. The family would like to extend a special thank you to his close friends, Jerry and Curtis Jackson and friends and family of Kingsway Baptist Church in Bristol, VA. The family will receive friends from 5:00 until 7:00 p.m. on Sunday, August 14, 2016 at Blevins Funeral & Cremation Services, 417 Lee St., Bristol, VA. The funeral service will follow at 7:00 p.m. in the funeral home chapel with Pastor Todd Freeman officiating. Masonic Rites will be conducted prior to the funeral. The committal service and interment will be conducted at 3:00 p.m. on Monday, August 15, 2016 at Mountain View Cemetery, Bristol, VA. Honorary Pallbearers will be Jerry Jackson, Curtis Jackson, Walter Newland, Daniel Gentry, Alex Andersen, George Gillen, Dwayne Orfield, and Trace Bratton.

Clayton Dempster Leonard, 91, of Bristol, VA went to be with his Lord on Thursday, August 11, 2016 at Bristol Regional Medical Center. He was born in Washington County, VA on October 16, 1924, a son of the late Robert Clifton Leonard and Pearl... View Obituary & Service Information

The family of Clayton Dempster Leonard created this Life Tributes page to make it easy to share your memories.

Clayton Dempster Leonard, 91, of Bristol, VA went to be with...

Send flowers to the Leonard family.