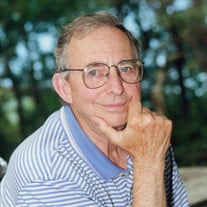 Clarence Young Wilkerson, Jr., 87, passed on Thursday, December 27, 2018. Clarence was born January 18, 1931 in Chase City, VA to Clarence Young, Sr. and Hazel Wilkerson. He grew up in both Chase City and Bristol, TN. He graduated from Tennessee High School in 1949. Clarence married Bobbie Lou Shoun and had two children, David Lee and Golda Carol. In 1952 he joined the Air Force and became a flight navigator. Later, he shifted his military career to financial services. He later married Martha Draper and had two children, Debra Leigh and John Richard. His military service took his family around the world with stops in Japan and England. He served for a year in Vietnam, leaving just as the Tet Offensive began. He served as the Comptroller of the U.S. Air Force Academy and moved to Texas to serve as Chief of Staff of AAFES Worldwide, the Army Air Force Exchange Service. Clarence retired from the Air Force in 1984. He became a certified financial planner and served as the Chief Financial Officer of the Visiting Nurse Association of North Texas in Dallas for nearly six years. Clarence married Becky on July 19, 1991. They had 27 years of happiness before Parkinson's took its toll on him. Clarence and Becky retired in 1996 and moved back to Bristol to be close to his mother Hazel. They spent a great deal of time at Becky's home in Red House, MD and traveling the country to visit their blended family. They traveled to Europe many times and traversed Cape Horn in South America while on an extended cruise. Clarence enjoyed reading, gardening, and spending time with family and friends. Clarence was preceded in death by his parents. He leaves behind his wife Becky; sister, Geri and her three children, Sharon, Steve and Joe Weller; his children, David (Sheila) of Durham, NC, Carol of Cheltenham, England, Debbie of Oakland, CA, and John (JoAnn) of Morehead City, NC; eight grandchildren, Shawn Wilkerson, Nathan Johnson, Nicolas Wilkerson, Brian Wilkerson, Timothy (Ali) Wilkerson, Julie Wilkerson, Kelly Dannucci, and Zachary (Chelsea) Wilkerson. He also will be remembered fondly by his three step-children, Cindy (Jerry) Jensen of Mansfield, TX, Chuck Fleming of Aurora, CO, and Matt (Inetha) Fleming of Beaverton, OR; and five step-grandchildren, Gavin, Delaney, Ben, Brenna and Matt. Clarence will be buried with full military honors at Arlington National Cemetery later in 2019. Special thanks for the support of family and friends, Amedisys Hospice staff and Pasha Bell, Home Helpers. You are invited to make a gift in his honor to a charity of your choice.

The family of Col. Clarence Y. Wilkerson, Jr. USAF, Retired created this Life Tributes page to make it easy to share your memories.