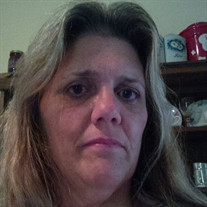 Cynthia L. Vires passed away Wednesday, October 8, 2014 at Wellmont Hospice House after a brain tumor claimed her life. She was born on July 8, 1962, the eldest daughter of Barney and Peggy Leonard Vires. In addition to her father, Barney, she was preceded in death by her paternal grandparents, Monty and Mary Ellen Vires and maternal grandparents R.J. and Virginia "Jettie"Oliver Leonard. Cindy Lou was raised in the First Freewill Baptist Church of Bristol, VA. She was a LPN at Bristol Regional Medical Center and St. Mary Hospital in Knoxville, TN where she specialized in pediatric ventilators and also worked in home health. She is survived by her mother, Peggy Vires; two sons, Matthew Vires and wife Kim, Chad Austin and friend Jennifer Wise; three granddaughters, Kadynce Kress, Madeline Vires and Savanah Vires; two step granddaughters, Abby Wise and Chloe Wise; special sister, who has been there for her all the way, Rebecca "Becky" Vires, her daughter, Brittany Rodriguez and granddaughter, Isabella McCloud; an aunt, who was as close to her as a mother, Betty Leonard; an aunt and uncle, Randy and Mary Jo Leonard; and several cousins and extended family. The family would like to extend a special thank you to the doctors and nurses at Wellmont Hospice House for all the love and support that was shown to Cindy and her family during this terrible time in their lives. The family will receive friends from 2:00 pm until 3:00 pm on Saturday, October 11, 2014 at Mountain View Cemetery Mausoleum. The funeral services will be conducted at 3:00 pm with Reverend Austin Cook officiating. The committal service and interment will follow at the cemetery. Friends may also call at the home of Matthew Vires, 546 Meadow Dr., Bristol, VA at any time. Pallbearers will be Matthew Vires, Chad Austin, Dempsey Messer, David Roberts, Derrick Honaker, Jarrod Hart, and Ricky Leonard. Honorary pallbearers will be Mark Ingle, Rick Morris, Jeff Cross, and Kenny Hubbard.

Cynthia L. Vires passed away Wednesday, October 8, 2014 at Wellmont Hospice House after a brain tumor claimed her life. She was born on July 8, 1962, the eldest daughter of Barney and Peggy Leonard Vires. In addition to her father, Barney,... View Obituary & Service Information

The family of Cynthia L. Vires created this Life Tributes page to make it easy to share your memories.

Send flowers to the Vires family.