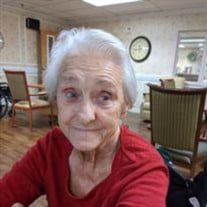 Daphne Lois (Griffin) Powers, 77, entered into the loving arms of Jesus during the early morning hours of Sunday (August 8, 2021). Lois was born on June 22, 1944 in Bristol, VA to the late Claude Lee & Margaret (Hutton) Griffin. Lois enjoyed being outdoors, going to yard sales, and spending time with her family and friends. She truly had the heart of a servant, she was always giving and putting others before herself. Lois was a loving wife, mother, grandmother, great-grandmother, sister, aunt, and friend; she will be greatly missed. In addition to her parents, Lois was preceded in death by her beloved husband, James Powers; son, Curtis Powers; two brothers, Charles and William Griffin; and two sisters, Vivian Love and Marie Sherfey; and special friend and pet, Roxie. Left to cherish her memory are her sons, Eugene Powers & wife Jeannie, and Jeff Powers; three grandsons, Jamie Powers, Terry Powers , and Jacob Powers ; two granddaughters, Ashley Powers and Lacey Powers; two great-grandsons, Hunter Maye; and Chipper Hamby; sister, Ann Boyle & husband Rod; special niece and nephew, Billy Griffin and Angie Rash; several nieces, nephews, and a host of friends. The family will receive friends on Wednesday (August 11, 2021) from 6 pm to 8 p.m. at Blevins Funeral Home and Cremation Services. Lois will be laid to rest on Thursday (August 12, 2021) at 11 a.m. at Mountain View Cemetery & Chapel Mausoleum (1019 East Valley Drive Bristol, VA 24201) with Pastor Benny Bowman officiating. Serving as pallbearers will be Billy Griffin, Jacob Powers, Will Rash, Robert Thomas, Clifford Powers, and Brian Ringley. The family would like to extend a special thank you to the staff at NHC, the staff of Caris Healthcare, Dr. Brett Odum, and her caregiver, Faye Dillow for the the kind and compassionate care that was both given and shown to Lois in her time of need.

The family of Daphne Lois Powers created this Life Tributes page to make it easy to share your memories.

Send flowers to the Powers family.