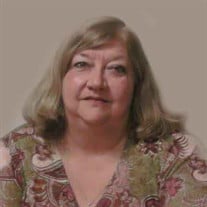 Darlene Elizabeth Basford Smith, 66, of Bristol, TN earned her wings and was welcomed into her heavenly home on Friday, March 17, 2017. She was born on July 4, 1950. She was preceded in death by her father, local radio personality, Douglas "Doug Ford" Basford; her mother, Vertie Mae Smith Basford; granddaughter, Ruby Dixon-Cunningham; brothers, Robert, Jerry, and Judd Basford; and sisters, Margaret Allen and Jean Basford. Darlene had a long and fulfilling career in nursing, initially completing her LPN training at the Slater Center in Bristol, TN and joining the staff at Bristol Memorial Hospital. She worked briefly at Humana Hospital in central Florida. Darlene continued her education and obtained an Associates Degree at VHCC in Abingdon, VA where she continued to work for several years. She had many friends and fond memories from this period of her life. Darlene then found her true calling in home health care working as a Director of Nursing for the next 25 years. As a policy writer and Director of Nursing, Darlene was instrumental in the opening of two separate home health agencies located in Bristol, VA. Darlene retired from nursing in 2014 to spend her golden years with her husband and love of her life, Joe. They spent a year in the mountains of Butler, TN before returning to Bristol, TN to make a home and be closer to their children and grandchildren. Darlene loved to travel, enjoying a honeymoon in Alaska, several trips across the country, one foray to Mexico and three trips to England, Scotland, Ireland, and France. She also loved the mountains and trips to Maggie Valley, NC. Darlene’s other passions included writing, attending church at Rivers Edge in Elizabethton, going to the lake, boating, genealogy, taking care of her of grandchildren and spending time with her family. Darlene is survived by her husband, Joseph Smith; her sister, Estella Bouton; daughters, Leslie Canipe and husband Robert, Angie Dixon and husband Randy Cunningham, Katie Dixon Sproles and husband James, all of Bristol, TN and Connie Lee and husband Erick of La Vergne, TN; son Anthony “Tony” Dixon of Bristol, VA; granddaughters, Aliese Bonn and husband Todd of Abingdon, VA, Sarah Canipe, Brittany Lee, and Raegan Sproles all of Bristol, TN and Madison Lee of La Vergne, TN; grandsons, Christian Roark and Logan Wayne McNew; three great grandchildren; several nieces and nephews; great nieces and nephews; and uncle, aunts and cousins. The family would like to send special thanks to Christian King, RN, Dr. David Astin, Michelle Snodgrass, FNP, and Bristol Tennessee lifesaving crew. The family will receive friends from 5:00 until 7:00 p.m. on Tuesday, March 21, 2017 at Blevins Funeral & Cremation Services, 417 Lee St., Bristol, VA. The funeral service will be conducted at 11:00 a.m. on Wednesday, March 22, 2017 in the funeral home chapel with Pastor Ricky Jones officiating. The committal service and interment will follow at Hendricks Cemetery, Mendota, VA. Pallbearers will be Todd Bonn, David Mitchell, Colt Musslewhite, Chris Coffey, Clayton Grubbs and Michael Harless.

Darlene Elizabeth Basford Smith, 66, of Bristol, TN earned her wings and was welcomed into her heavenly home on Friday, March 17, 2017. She was born on July 4, 1950. She was preceded in death by her father, local radio personality, Douglas "Doug... View Obituary & Service Information

The family of Darlene Elizabeth Basford Smith created this Life Tributes page to make it easy to share your memories.

Send flowers to the Smith family.