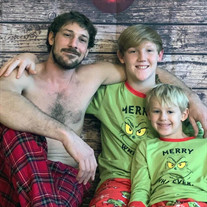 David Harris Gills, 32, of Bristol, VA passed away suddenly on Thursday, February 18th, 2021 in the Bristol Regional Medical Center, Bristol, TN following heart complications. He was born in Wilmington, DE on February 22nd, 1988. David was preceded in death by his Paternal Grandfather, Garland H. Gills; and his Maternal Grandparents, Joseph J. Davolos and Clelia E. Disabatino Davolos. David was a loving son, grandson, father, brother, uncle and friend. David was a jack of all trades and was a hard worker pouring everything he had into all of his endeavors. He had worked in plenty of trades including landscaping, arborizing, masonry, and contracting. Outside of work, David had enjoyed hunting and fishing the forests, lakes, streams of the eastern United States. He was also locally famous for his voice, singing and playing music bringing joy to all of his many friends and family where ever he went. David had a spark in his soul and will be missed by all. David is survived by his two loving parents, Garland Leslie Gills and Joanne Davolos Gills; paternal grandmother, Mary E. Jamison Gills of Wilmington, DE; two sons, Austin David Gills and Mason Jackson Gills; three brothers, Garland L. Gills, II of Cartersville, VA, Joseph J. Gills (Moises) of Cambridge, UK, Michael R. Gills (Jillian) of Groveland, FL; one sister, Kristin G. Ownby (Dennis) of Cumberland, VA; and several nieces and nephews. There are no services planned at this time. In lieu of flowers, the family is requesting that donations be made to the Elim Home, PO Box 69, Madison Heights, VA 24572; ph.#: (434) 592-5629; www.elimhome.org/donate/. Condolences for the family may be sent and viewed by visiting www.BlevinsCares.com. David and his family are in the care of Blevins Funeral & Cremation Services, 417 Lee St., Bristol, VA 24201; ph.#: (276) 669-6141.

The family of David Harris Gills created this Life Tributes page to make it easy to share your memories.

David Harris Gills, 32, of Bristol, VA passed away suddenly on...

Send flowers to the Gills family.