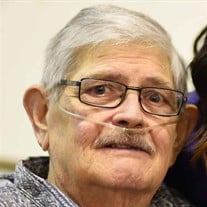 David Edward Ide David Edward Ide, 68, of Bristol, Tennessee went to be with his Lord on Friday, September 16, 2016 at Bristol Regional Medical Center following an extended illness. He was born in Lansing, MI on October 20, 1947, a son of the late Edward and Virginia Ide, and birth mother, Connie Ide. He lived most of his life in Bristol, TN, and was a member of the Tennessee Avenue Baptist Church. David worked as a chef for many years and retired from Bristol Compressors as an assembler for 20 years. David is survived by his loving wife, Norma Ide; a daughter, Lilly Grace Ide; mother-in-law, Rosemary Miller; sister-in-law, Cherril Maupin and her husband, John; and nephews, Ben Johnson and Andrew Maupin; great-nephew, Bentley Johnson. David will be greatly missed by his special friends, Chuck and LaVonne Emery and their daughters, Marcie and Jessie. David dearly loved his animals, Oscar (Bubba), Nellie and Socks. Bubba will miss daddy throwing Teddy. The family would like to express a special thank you to the Dr's and nursing staff of the 3rd floor at BRMC for all the love and care shown to David during his illness. The family will receive friends from 6:00 to 7:00 P.M., on Monday, September 19, 2016 at Tennessee Avenue Baptist Church, 104 Cypress Street, Bristol, TN 37620. The funeral service will be conducted at 7:00 P.M. at the church with Bro. Mike Eklund officiating. The committal service and entombment will be held privately at a later date. Honorary Pallbearers will be John Maupin, Ben Johnson, Andrew Maupin, George Jones, Ron Hall, and Chuck Emery, Jr.. In lieu of flowers, the family is requesting that donations be made to Tennessee Avenue Christian Academy, 826 Tennessee Ave., Bristol, TN 37620.

David Edward Ide David Edward Ide, 68, of Bristol, Tennessee went to be with his Lord on Friday, September 16, 2016 at Bristol Regional Medical Center following an extended illness. He was born in Lansing, MI on October 20, 1947, a son of... View Obituary & Service Information

The family of David Edward Ide created this Life Tributes page to make it easy to share your memories.

Send flowers to the Ide family.