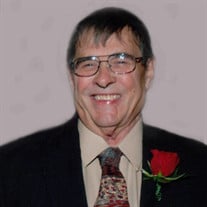 David Howard Parsons, 83, of Bluff City, TN died peacefully surrounded by family and friends on Tuesday, October 11, 2016 in Bristol, TN. He was born in Sherburne, NY on July 23, 1933, to the late Miles and Hilda Parsons. In addition to his parents, he was preceded in death by his sister, Mary Bunce and brother-in-law, Bob White. He graduated from Ilion High School, Ilion, NY. David was a proud veteran serving in the United States Air Force during the Korean War from 1952-1956 with station in North Africa as a radio operator and was discharged honorably with the rank of Staff Sergeant. He was retired from Unisys as a Test Engineer with over 30 years of service. He was a member of the American Legion for over 30 years and a former member of the Virginia High School Bearcat Booster Club. David was baptized in the Methodist church. David is survived by his wife, Alma Jean Parsons of Bluff City, TN; daughters, Brenda (Tim) Murphy of Port St. Lucie, FL, Sandy (Larry) Goforth of Spencer Port, NY, and Judy McClousky of Herkimer, NY; stepsons, Jeff Buchanan (Renee Pohorence) of Bridge City, TX and Brian and Eden Buchanan of Blountville, TN; brother-in-law, David Hall; sister-in-law, Mary White of Bristol, TN; nine grandchildren; and eight great grandchildren; his best friend from New York, John Murphy; and Winston, his beloved dachshund. David wished to be cremated and buried in a private graveside service at Mountain Home National Cemetery, Mountain Home, TN with his fellow veterans. Military honors will be provided by the United States Air Force Honor Guard and the Disabled American Veterans Chapter #40. In lieu of flowers, the family is requesting that donations be sent to the SBK Animal Center, 380 Massengill Rd., Blountville, TN 37617. Condolences for the family may be sent and viewed by visiting www.BlevinsCares.com. Mr. Parsons and his family are in the care of Blevins Funeral & Cremation Services. (276) 669-6141.

David Howard Parsons, 83, of Bluff City, TN died peacefully surrounded by family and friends on Tuesday, October 11, 2016 in Bristol, TN. He was born in Sherburne, NY on July 23, 1933, to the late Miles and Hilda Parsons. In addition to his... View Obituary & Service Information

The family of David Howard Parsons created this Life Tributes page to make it easy to share your memories.

Send flowers to the Parsons family.