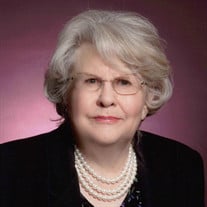 Doris S. Harkrader, 87, of Bristol, VA passed away peacefully on Monday, June 25, 2018 at her home. She was born in Appalachia, VA on January 28, 1931, a daughter of the late William and Lula Stone Stout. In addition to her parents, she was preceded in death by her husband, Hal Haynes Harkrader, Jr.; daughter, Karen Harkrader Poore; and brother, Harry Stout. She graduated from Appalachia High School class of 1949. After attending Radford College (class of 1953), Doris lived and worked in Kingsport, TN, married in 1954, and moved to Bristol, VA. She was artistic and a devoted gardener. She was a volunteer for the PTA, for which she received a Life membership award, and was a member of Junior League for many years. As a devoted member of Central Presbyterian Church, she served as Deacon, Elder, a member of the Bereavement Committee, and was very active there until a stroke incapacitated her in 2006. She leaves behind a legacy of love, virtue, and kindness that touched many, especially those who received her annual birthday calls. Doris is survived by her daughter, Diane Harkrader LeCroy and husband Phil of Virginia Beach, VA; son, Hal H. (Chip) Harkrader, III of Blacksburg, VA; son-in-law, Jim Poore of Bristol, VA; two wonderful granddaughters, Amy LeCroy and Sarah Poore; and a niece and several nephews The family would like to express their gratitude to all her wonderful caregivers and Wellmont Hospice for all the love and care shown to Doris during her illness. The Committal & Interment will be held at 1:00 p.m. Friday, June 29, 2018 at Glenwood Cemetery, Bristol, TN. A Funeral Service will be held at 3:00 p.m. at Central Presbyterian Church with Reverend Ann Aichinger and Reverend Frank Aichinger officiating. The family will receive friends at a reception at the church following the service. In lieu of flowers, memorial donations may be made to Central Presbyterian Church, 301 Euclid Avenue, Bristol, VA 24201; Healing Hands Health Center, 245 Midway Medical Park, Bristol, TN 37620; or a charity of your choice.

Doris S. Harkrader, 87, of Bristol, VA passed away peacefully on Monday, June 25, 2018 at her home. She was born in Appalachia, VA on January 28, 1931, a daughter of the late William and Lula Stone Stout. In addition to her parents, she was... View Obituary & Service Information

The family of Doris S. Harkrader created this Life Tributes page to make it easy to share your memories.

Send flowers to the Harkrader family.