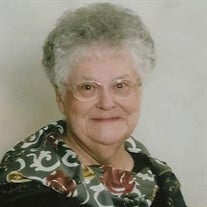 Proverbs, 31:28 - Her Children arise up, and call her Blessed; her husband also, and he praiseth her. Dorothy Lee Martin Everts, 84, of Bristol, TN went to be with her Lord and Savior on Friday, January 3, 2020 in Bristol, TN. She was born in Worthington, WV on June 24, 1935, a daughter of the late Charles LeRoy Martin and Vera Hope Kellar. In addition to her parents, she was preceded in death by her grandparents, George Wallace Martin and Maude B. Lamb and Neal U. Kellar and Carrie M. Tetrick; brother, Arliss Lynn "Dude" Martin; sister, Kitty Pearlene Martin Coburn; sister, Alvera "Vickie" Martin Campbell; and brothers-in-law, Charley Campbell and Harold Foster Coburn. Dorothy married her husband, Floyd E. Everts on November 25, 1956 in Trenton, NJ. Later she and her husband moved to Bristol, TN in 1976. There they celebrated 63 years of marriage and raised two sons. Her greatest joy was loving and caring for her family, she enjoyed camping and spending time with them. She was a member of the West Hills Baptist Church, Bristol, TN. Dorothy is survived by her loving husband Floyd Everts; two sons, Robert L. Everts and wife, Lisa and David C. Everts and wife Karla; two grandsons, Jeremy E. Everts and fiancée, Christia Sandidge and Brian Resnik; three granddaughters, April N. Leonard, Amber R. Willen and Christina R. Gilbert; five great grandsons, Alex Leonard, Harley Hartman, Jason Hartman, Jonathon Gilbert and Noah Gilbert; one brother, Dana Martin and wife, Nancy of NJ; beloved pet, Bandit; and several nieces and nephews. The family would give a special "Thank You" to Jerri-Ann Williams, Lori Campbell, Jon Hill and the ICU Staff at BRMC for all the love and care shown to Dorothy during her illness. Graveside Services and Entombment will be conducted at Glenwood Cemetery, Heritage Mausoleum, 839 Bluff City Highway, Bristol, TN 37620 at 2:00 p.m., Monday, January 6, 2020. Pallbearers will be Jeremy Everts, Brian Resnik, Alex Leonard, Harley Hartman, Jason Hartman and Franklin Hartman. Honorary Pallbearers will be Josh Gilbert, Carl Bryant, Leslie Bryant and Justin Bryant. Everyone is asked to meet at the cemetery at 1:45 p.m., Monday. In lieu of flowers, the family is requesting that donations be made to Blevins Funeral & Cremation Services to help with the funeral expenses. Condolences for the family may be sent and viewed by visiting www.BlevinsCares.com. Mrs. Everts and her family are in the care of Blevins Funeral & Cremation Services, 417 Lee St., Bristol, VA 24201. Phone # - (276) 669-6141.

Proverbs, 31:28 - Her Children arise up, and call her Blessed; her husband also, and he praiseth her. Dorothy Lee Martin Everts, 84, of Bristol, TN went to be with her Lord and Savior on Friday, January 3, 2020 in Bristol, TN. She was born... View Obituary & Service Information

The family of Dorothy Lee Martin Everts created this Life Tributes page to make it easy to share your memories.

Send flowers to the Everts family.