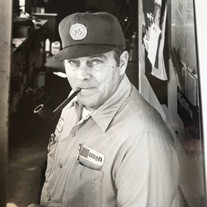 Edward Franklin Carter, Sr., age 94, entered into the loving arms of Jesus during the morning hours of Sunday, August 15, 2021. Edward was born on August 25, 1926, in Eccles, West Virginia to the late Worley Allen & Roxie Ann Osborne Carter. Edward lived in Wise County, Virginia, and relocated to Bristol in 1943. He unselfishly served our country in the United States Navy during World War II, serving in the South Pacific on the SS Mormachawk. Edward later returned to graduate from Blountville High School. Edward was employed at Firestone and later owned and operated Shell, Sunoco, and Carter’s Union 76 Service Stations. He was the last full-service station proprietor in the city of Bristol. After retirement, he worked part time for Bristol Virginia Parks and Recreation as a park ranger. Due to his in-depth knowledge of the Civil War, Edward presented numerous demonstrations and lectures to hundreds of school children and provided his Civil War collection as a reference and teaching tool to learn about the weaponry and history of the Civil War. He took an active role in reenactments and participated in the raising of CSS Hunley in the Charleston South Carolina Harbor. To further expand his interest in the history of the United States, Edward had the privilege to be included in the movie Gods and Generals. Edward was a loving husband, father, grandfather, brother, uncle, and friend; he will be greatly missed. In addition to his parents, Edward was preceded in death by his grandson, Levi Carter; loving wife of over 62 years, Elizabeth Prater Carter; son, Jerry Carter; and three brothers, Joseph Carter, Ronald Carter, and Lionel Carter. Left to cherish his memory are his four sons: Edward Carter, Jr. & wife Kathy L., Thomas Carter & wife Nancy B., Jimmy Carter & wife Kathy C., and Richard Carter & wife Donette B.; nine grandchildren; three great-grandchildren; several nieces, nephews, and a host of friends. The family will receive family and friends on Wednesday, August 18, 2021, from 6:00 PM to 8:00 PM at Blevins Funeral Home and Cremation Services. Edward will be laid to rest on Thursday, August 19, 2021, at 11:00 AM at Mountain View Cemetery & Chapel Mausoleum, 1019 East Valley Drive, Bristol, Virginia 24201, with Pastor Van Seal officiating. In lieu of flowers, the family requests that memorial contributions be sent to Abingdon Presbyterian Church located at 18438 Lee Highway, Abingdon, Virginia 24210.

The family of Edward Franklin Carter Sr. created this Life Tributes page to make it easy to share your memories.

Send flowers to the Carter family.