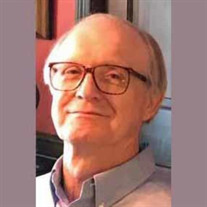 Edwin Thomas Hardison, 83, passed away peacefully May 17, 2021 at Abingdon Health and Rehab with his wife of 44 years, Diana, by his side. He is survived by an older brother, Darwin (Elaine) and nephew Mark (Pamela) Hardison of Fairhope Alabama along with three beloved cousins in Winchester, Tennessee, Jim (Judy), Bill (Peggy) and Linda Kay (Bobby) and a fourth in Tyler, Texas (Dixianna). He was pre-deceased by another older brother, Jack Morgan Hardison, in 2003. Born May 1, 1938 in Huntland, Tennessee to Russell and Christine Hardison, Edwin graduated from Franklin County High School in Winchester. He was a Tennessean through and through, the family holding title to land where frontiersman Davy Crockett lived as a young man. Always a highly capable student but of agrarian origins, he was without capital to pursue a college education. In those early days prior to Federal and state financial aid, he labored for two years in a grocery store to earn funds for tuition and expenses; he credits the experience as time well spent in understanding management of real world situations under the guidance of a seasoned proprietor. Having won prizes in high school for artwork of different types, Ed had always sought a career in the traditional arts, perhaps as an illustrator, but once enrolled at the University of Tennessee, he found the Beatnik era and abstract art had overtaken faculty interests and their methods of teaching left him cold. After a year he changed his major. He turned to producing portraits of his fellow students for extra income and to the amusement of many, created caricatures of friends then and throughout his life. He also acted in a number of productions at the Clarence Brown Theatre and was often sought out to apply theatrical makeup for other performers. Never taking a break and attending year round, Ed completed a four year education within three years, earning a BA in History at UT. Upon college graduation, Ed worked for five years as a high school teacher, two years in Jonesboro, Georgia and three years at Cross Keys High School in Atlanta, where he frequently directed student plays. By then graduate studies beckoned and Ed returned to the University of Tennessee where he earned his Masters and served as a teaching assistant in the Department of History. After completion of his Thesis (“Munich—Moralism and Illusion: American Magazines Look at a Crisis”), he joined the research staff of the Andrew Johnson Papers. By 1971 Ed had become Assistant Professor of History at Virginia Highlands Community College, working through the ranks of Division Chair, Dean, and ultimately Vice President of Instruction and Student Services, a role he served in for many years until his retirement. Along the way he married Diana Dixon of Elizabeth City, NC and earned a Ph.D. from the University of Tennessee. While completing the degree, he managed Gibbs Hall as Head Resident and formed friendships with many talented athletes who later became professional football players and Olympic competitors. As to scholarship, noted historian Hans Trefousse referenced Ed’s dissertation liberally in an important biography of Andrew Johnson. Ed often served as a speaker on history topics for local and regional groups, and once filled a term as President of the Chamber of Commerce for Washington County. He always enjoyed gentle-natured ribbing. A jokester friend at the college kept calling him Edwin “Tecumseh” Hardison to the extent that other people on staff actually started to believe that was his middle name. He appeared much younger than his years and not a month went by that someone did not remark he reminded them of the actor Alan Alda. Many described Ed as the perfect gentleman. Ed’s interests were eclectic and wide-ranging and he collected examples of popular culture in many forms. He was a devotee of radio programs in their infancy, enjoyed early pulp comics, and embraced black and white films of the 1930’s. He and spouse Diana particularly enjoyed trips to galleries in England and Europe in 1980s and 1990’s; their favorite and most frequently visited cities were London and Venice. Upon joint retirement, they both enjoyed cocooning, catching up on reading, and continuing film viewing from earlier eras. Per Ed’s wishes, there will be no funeral. In lieu of flowers, contributions in his honor may be directed to any no-kill animal shelter, the Fund for University of Tennessee Libraries, 1015 Volunteer Blvd, Knoxville, TN 37996, or the charity of one’s choice. Online condolences may be made to the Hardison family at www.blevinscares.com. Blevins Funeral Home and Cremation Services has the honor of serving theHardison family.

Edwin Thomas Hardison, 83, passed away peacefully May 17, 2021 at Abingdon Health and Rehab with his wife of 44 years, Diana, by his side. He is survived by an older brother, Darwin (Elaine) and nephew Mark (Pamela) Hardison of Fairhope Alabama... View Obituary & Service Information

The family of Edwin Thomas Hardison created this Life Tributes page to make it easy to share your memories.

Send flowers to the Hardison family.