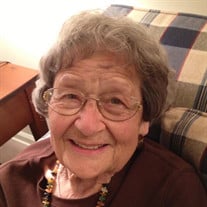 Eleanor Dean Jackson, 92, passed away Friday, December 5, 2014 at the nursing facility where she resided since June of this year. She was the daughter of the late Ethel Irvin and Edward Jackson Dean. She was preceded in death by her husband, Fred Willard Jackson; her daughter, Janet Jackson Wright; two brothers; and one sister. Eleanor grew up in Wythe County, VA but was a resident of Bristol, VA for 64 years. She was a life long member of State Street United Methodist Church where she served as President of United Methodist Women, taught Sunday school and was a member of several circles. Eleanor was very active in volunteer organizations often serving as president of the PTA, Border Guild, Junior League and the Blue Stocking Club. She and her late husband were staunch supporters of Emory and Henry College and established a scholarship in Fred's memory. Eleanor was always available for her children and they knew they could always count on her! Survivors include her daughter, Jane Jackson Woerner and husband Bill Woerner of Palm City, FL and many nieces and nephews on the Jackson and Dean sides of the family. The family will receive friends from 5:30 pm until 7:00 pm on Thursday, December 11, 2014 at Blevins Funeral & Cremation Services, 417 Lee St., Bristol, VA. The funeral service will be conducted at 11:00 am on Friday, December 12, 2014 at State Street United Methodist Church with Reverend Jonathan Jonas and Mark Hicks officiating. The committal service and interment will follow at Mountain View Cemetery in Bristol, VA. In lieu of flowers, the family is requesting that donations be sent to State Street UMC Choir, 300 W. Valley St., Bristol, VA 24201 or Emory & Henry College, Fred Willard Jackson Scholarship Fund, P.O. Box 950, Emory, VA 24327. Condolences for the family may be sent and viewed by visiting www.BlevinsCares.com. Mrs. Jackson and her family are in the care of Blevins Funeral & Cremation Services. (276) 669-6141.

Eleanor Dean Jackson, 92, passed away Friday, December 5, 2014 at the nursing facility where she resided since June of this year. She was the daughter of the late Ethel Irvin and Edward Jackson Dean. She was preceded in death by her husband,... View Obituary & Service Information

The family of Eleanor Dean Jackson created this Life Tributes page to make it easy to share your memories.

Send flowers to the Jackson family.