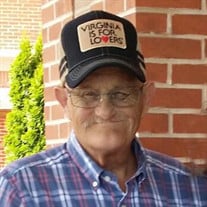 Freddie Booher, 65, of Bristol, TN went home to be with his Lord on Thursday, November 1, 2018 at the University of Virginia Medical Center, Charlottesville, VA. He was a life long resident of Bristol, TN and was a son of the late Carl Booher Sr. and Gladys Worley Booher. In addition to his parents, he was preceded in death by a sister, Christine Harley; and a step-son, Douglas "Ed" Chapman; a sister-in-law, Mary Jane Booher. Freddie was a veteran of the U.S. Navy and retired from Bristol Metals. He was a devoted assistant pastor of Shakesville Tabernacle Missionary Baptist Church. He was very active on WZAP Christian Broadcast Radio for over twenty years and WIGN for the past two years. He also served as the director of Radio Broadcast for Shakesville Tabernacle Missionary Baptist Church. He is survived by his loving wife of twenty-one years, Catherine Booher; two sons, Glen Booher and Sheena Webb, and Andy Booher and Brittany Aiken; three step-children, Connie Gail Peake, Jay Chapman and his wife, Melissa, and Neal "Chris" Chapman and his wife, Nikki; a step daughter-in-law, Judy Chapman; three brothers, Carl Booher, Jr. and his wife, Vannie, Daniel Lee Booher, Sr. and his wife, Daphne, and his twin brother, Eddie Wayne Booher, Sr.; one sister, Tere Booher and Ray Wilson; 20 grandchildren, 16 great grandchildren, and several nieces and nephews. The family would like to express a special thank you to the staff of Bristol Regional Medical Center, UVA Medical Center, Emily Couric Cancer Center, and especially his twin brother, Eddie, for being his stem cell donor. The family will receive friends from 6:00 PM until 8:00 PM Tuesday, November 6, 2018 at Shakesville Tabernacle Missionary Baptist Church, 2463 Shakesville Rd., Bristol, VA. The funeral service will follow at 8:00 PM Tuesday at the church with Pastor Tim Michaels, Bro. Johnny Dillard, and Pastor Gene Reynolds officiating. The committal service and interment will be conducted at 2:00 PM Wednesday, November 7, 2018 at Glenwood Cemetery, Bristol, TN. Pallbearers will be Robert Booher, Sr., Eddie Booher, Jr., Brad Michaels, Justin Chafin, Ezra Anderson, and Dakota Corvin. Honorary Pallbearers will be Glen Booher, Andy Booher, Orion Booher, Jay Chapman, and Chris Chapman. Everyone attending the committal service is asked to meet at the cemetery by 1:45 PM Wednesday. In lieu of flowers, the family is requesting that donations be made to Shakesville Tabernacle Missionary Baptist Church, 1228 Kentucky Ave., Bristol, TN 37620. Condolences for the family may be sent and viewed by visiting www.BlevinsCares.com. Mr. Booher and his family are in the care of Blevins Funeral & Cremation Services.(276) 669-6141.

Freddie Booher, 65, of Bristol, TN went home to be with his Lord on Thursday, November 1, 2018 at the University of Virginia Medical Center, Charlottesville, VA. He was a life long resident of Bristol, TN and was a son of the late Carl Booher... View Obituary & Service Information

The family of Freddie Allen Booher created this Life Tributes page to make it easy to share your memories.

Freddie Booher, 65, of Bristol, TN went home to be with his Lord...

Send flowers to the Booher family.