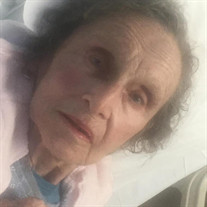 Glenna Jean Neal Alexander January 20th, 1941 - March 24th, 2021 Jean was born in Bluefield,WV. She was married and became a mother at the age of sixteen. She was married to Ellis B Alexander and raised two sons and one daughter together. Glenna was a beloved mother. She had eyes the color of iced blue topaz. She had a heart shaped mole on the left side of her neck and was petite in stature but as feisty as a mountain lion. Always a lady! She possessed great wisdom in guidance and was slow to anger. Giving all unto others and keeping none for herself. Meek in temperament and guarded in pain. Many struggles and pain in youth, grew independent with age. Always quick to say yes and rare to ever say no. I know your spirit is with our Heavenly King. You are so truly loved. Glenna was preceded in death by her husband Ellis B. Alexander; her parents; Robert Wade Neal and Amanda Cloah Carroll Neal; one brother, Ralph Neal; and one son, Ellis B. Alexander Jr. She is survived by one brother, Charles Neal of Bluefield, WV; one sister, Anne Stophel; one daughter, Marcia Alexander Tiller and her husband John D Tiller of Bristol, VA; one son, David Charles Alexander and Lisa of Bristol, VA; one daughter in law, Jackie Alexander; two grandsons, Joshua Alexander and David Clayman both of Bristol,VA; one granddaughter, Misti Lane of Bristol, VA; one grandson, Michael Tiller of Bristol, VA; two great grandsons, Brandon Burke and Jesse Lane of Bristol, VA; one great granddaughter, Kaiti Lane of Bristol, VA; two great-great grand babies, Elizabeth and Nevaeh of Bristol,VA; and several nieces, nephews and cousins. There will be a private burial held at Barker Family Cemetery in Benhams, VA. Condolences for the family may be sent and viewed by visiting www.BlevinsCares.com. Mrs. Alexander and her family are in the special care of Blevins Funeral & Cremation Services, 417 Lee St., Bristol, VA 24201; ph.#: (276) 669-6141.

Glenna Jean Neal Alexander January 20th, 1941 - March 24th, 2021 Jean was born in Bluefield,WV. She was married and became a mother at the age of sixteen. She was married to Ellis B Alexander and raised two sons and one daughter together. Glenna... View Obituary & Service Information

The family of Glenna Jean Neal Alexander created this Life Tributes page to make it easy to share your memories.

Send flowers to the Alexander family.