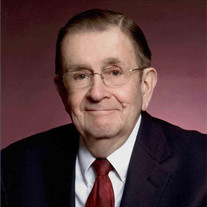 Hal Haynes Harkrader, Jr., 88, died on Thursday evening, January 14, 2016. He was born in Bristol, VA on March 3, 1927, son of Hal H. Harkrader, Sr. and Helen Eakin Harkrader. In addition to his parents, he was preceeded in death by a brother, Joseph F. Harkrader, a daughter, Karen Harkrader Poore and an aunt, Doris Eakin. Following graduation from Virginia High School, Hal served in the United States Navy in the Pacific in 1945-1946. He attended Virgina Polytechnic Institute and graduated in the class of 1951. Shortly thereafter, he joined the family business on Piedmont Street and managed Harkrader Service Station for 40 years. Located in the midst of retail, professional and municipal buildings, the business enjoyed a multitude of loyal customers from all walks of life. Known for his clever sense of humor and avid enthusiasm for all Virginia Tech sports, he was nonetheless a soft-spoken gentleman at all times. Hal was a lifelong member and Deacon at Central Presbyterian Church. He is survived by his wife of 61 years, Doris Stout Harkrader; one son, Hal H. "Chip" Harkrader, III of Blacksburg, VA; one daughter, Diane Harkrader LeCroy, son-in-law, Phil LeCroy and granddaughter, Amy LeCroy, all of Virginia Beach VA; son-in-law, Jim Poore and granddaughter Sarah Poore of Bristol, VA; one sister, Sue Ellen Harkrader Johnson of Murfreesboro, TN and a niece and several nephews. Funeral services will be held at 1 p.m. on Monday, January 18, 2016 at Central Presbyterian Church with Rev. Ann Fitzgerald Aichinger and Dr. George H. Fitzgerald, former pastor, officiating. The family will receive friends beginning at noon at the church before the service. Committal and burial will follow at Glenwood Cemetery mausoleum with military honors rendered by VFW Post #6975. In lieu of flowers, memorials may be offered to Central Presbyterian Church, 301 Euclid Avenue, Bristol, VA 24201, the Alzheimer's Association or a charity of one's choosing.

Hal Haynes Harkrader, Jr., 88, died on Thursday evening, January 14, 2016. He was born in Bristol, VA on March 3, 1927, son of Hal H. Harkrader, Sr. and Helen Eakin Harkrader. In addition to his parents, he was preceeded in death by a brother,... View Obituary & Service Information

The family of Hal Haynes Harkrader Jr. created this Life Tributes page to make it easy to share your memories.

Send flowers to the Harkrader family.