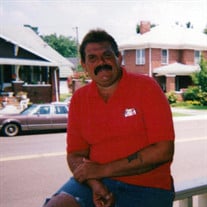 Harry "Jamie" James Hunsucker, 57, of Bristol, VA passed away on Tuesday, April 13th, 2021 at his residence in Bristol, VA following an extended illness. He was born in Steubenville, OH on January 29th, 1964. He was preceded in death by his father, Harry Daniel Hunsucker; paternal grandparents, James Arlin Hunsucker and Cassie Bell Hammonds Hunsucker; maternal grandparents, James Marion Morris and Emma Lou Vanderpool Morris; and his special cousin, Lee Fleming. Jamie was a loving and devoted son, father, grandfather, brother, uncle, cousin and friend. For most of his life he had worked several different jobs which included roofing and operating machinery at Tri Cities Excursions, and most recently he was a cook at Food City Deli. Jamie was a true blue Cleveland Browns fan and enjoyed spending time in the great outdoors hunting and fishing with his family. He loved spending time with his family, most especially his grandchildren. He had previously raced in stock car racing and enjoyed driving and watching racing overall. Jamie also enjoyed playing and watching baseball and football as he had played both while in high school. He also loved going to see his son fight in the Ultimate Fighting Championships. Jamie is survived by his mother, Blanche Ellen Merritt Hunsucker of Bristol, VA; three sons, Daniel James Hunsucker of Lexington, KY, Harry James Hunsucker Jr. and wife Vanessa of Richmond, KY, and Avery James Hunsucker of Bristol, VA; three sisters, Donna Lucille Hunsucker Cendol and husband David of East Lake, OH, Emma Jane Hunsucker Hughes of Bristol, TN, and Daniela Hunsucker Hall of Bristol, VA; two grandsons; three granddaughters; and several nieces, nephews, great nieces, great nephews and cousins. The family will receive friends from 4:00 pm until 6:00 pm on Saturday, April 17th, 2021 at Blevins Funeral & Cremation Services. The funeral service will follow the visitation at 6:00 pm at Blevins Funeral & Cremation Services, with Elder/ Bibleworker Michael Harback officiating. The committal service and interment will be conducted at 10:00 am on Sunday, April 18th, 2021, at Mountain View Cemetery in Bristol, VA. Pallbearers will be selected from friends and family. Everyone is asked to meet at the cemetery at 9:45 am to attend the committal service. In lieu of flowers, the family is requesting that donations be made out to Blevins Funeral & Cremation Services to help cover the cost of funeral expenses. Condolences for the family may be sent and viewed by visiting www.BlevinsCares.com. Mr. Hunsucker and his family are in the care of Blevins Funeral & Cremation Services, 417 Lee St., Bristol, VA 24201; ph.#: (276) 669-6141.

Harry "Jamie" James Hunsucker, 57, of Bristol, VA passed away on Tuesday, April 13th, 2021 at his residence in Bristol, VA following an extended illness. He was born in Steubenville, OH on January 29th, 1964. He was preceded in death by his... View Obituary & Service Information

The family of Harry James Hunsucker created this Life Tributes page to make it easy to share your memories.

Send flowers to the Hunsucker family.