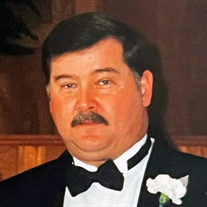 Jackie Benton Blevins, age 69, of Bristol, Virginia, passed away on Monday, May 2, 2022, following a courageous battle with pancreatic cancer. He was born in Iaeger, West Virginia, on July 20, 1952, to the late William Wells Blevins and Ruby Nell Fife Blevins. In addition to his parents, he was preceded in death by his grandson, Winston Blevins; and two special first cousins, Danny and Bill Blevins. Formerly of Breaks, Virginia, Jackie was a 1970 graduate of Grundy Sr. High School where he lettered in both football and baseball. He then went on to complete his education at Virginia Computer College where he met some of his lifelong, best friends. He also spent six years in the Army Reserves; however, most of his professional career was spent in the mining industry as well as playing a part in the revitalization of Downtown Bristol. Jackie was an amazing golfer, an avid outdoorsman, a serious hunter and fisherman, as well as a NASCAR fan. However, in his later years, he found his greatest joys at baseball games, football fields, track meets, Rhythm & Roots, and dance recitals. He was a hero to each of his six grandchildren, and no matter what the sport or activity, he was each child’s biggest fan. Their hearts will be forever changed. Those left to cherish his memory are his loving wife of 50 years, Nancy Raines Blevins; son, Jason and wife, Ashley; daughter, Jennifer and husband, Austin; son, Eric and wife, Christina; grandchildren, Alex and Sophia Crumpton; Andrew, Jack, and Kate Blevins; and Ruby Claire Blevins. The family will receive friends to celebrate his life on Sunday, May 15, 2022, from 1:00 p.m.- 2:30 p.m. at Blevins Funeral Home, 417 Lee Street, Bristol, Virginia. Flowers are welcome; however, memorial donations can be made in his name to the Cyclone Touchdown Club or Cyclone Dugout Club ,509 Highway 91, Elizabethton, TN 37643. Condolences for the family may be sent and viewed by visiting www.BlevinsCares.com . Mr. Blevins and his family are in the care of Blevins Funeral & Cremation Services. (276) 669-6141.

Jackie Benton Blevins, age 69, of Bristol, Virginia, passed away on Monday, May 2, 2022, following a courageous battle with pancreatic cancer. He was born in Iaeger, West Virginia, on July 20, 1952, to the late William Wells Blevins and Ruby... View Obituary & Service Information

The family of Jackie Benton Blevins created this Life Tributes page to make it easy to share your memories.