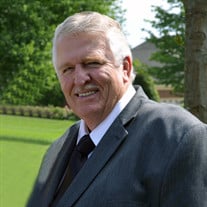 James B. Cox, 74, of Bristol, Virginia, devoted father and husband, passed away on Friday, December 30, 2016 at his residence in Bristol, Virginia. He was born in Bristol, TN on May 8, 1942, a son of the late Matthew Butler and Chiquita Jackson Lewis Cox. In addition to his parents, he was preceded in death by siblings, Matthew Butler Cox, Jr. and Jane Cox Chasteen; and a sister-in-law, Kitty Cox. James was a veteran having served in the United States Air Force. He was employed with Electrolux/Aerus for 33 years. He was a 36 year member of the Masonic Order and served as Worshipful Master of Shelby Lodge #126 in 1985. He was also Past Worthy Patron of The Eastern Star, Bristol Chapter #28. He loved the competition of motocross and enduro racing, along with his son Kenny, in the Tri-cities area throughout the 70's. Later in life he enjoyed playing golf with friends and winning a quarter a hole. He attended Highlands Fellowship in Bristol, VA. James is survived by his loving wife of 52 years, Gladys Rosenbaum Cox; son, Kenny Cox of Bristol, VA; daughter, Tracy Liverman and husband, Larry of Knoxville, TN; grandson, L.B. Liverman of Knoxville, TN; brother, John Cox of Richmond Hill, GA; sister-in-law, Carol Cox of San Rafael, CA; several nieces and nephews. The family would like to express a special thank you to the incredible staff of Hometown Hospice and the VA Hospital for all the love and care shown to James during his illness. The family will receive friends from 5:00 p.m. until 7:00 p.m. on Tuesday, January 3, 2017 at Blevins Funeral Home and Cremation Service, 417 Lee St., Bristol, VA. The Masonic Rites will be conducted at 7:00 p.m. by members of Shelby Lodge #162 on Tuesday and the Funeral Service will follow at the funeral home with Pastor Steve Robinson officiating. The Committal Service and Interment will be conducted at 11:00 a.m. on Wednesday, January 4, 2017 at Mountain View Cemetery, Bristol, VA. Military Honors will be provided by the VFW Honor Guard Post #6975 and Shaw Air Force Base Honors Team. Everyone is asked to meet at the cemetery at 10:50 am Wednesday. Condolences for the family may be sent and viewed by visiting www.BlevinsCares.com. Mr. Cox and his family are in the care of Blevins Funeral & Cremation Services.(276) 669-6141.

James B. Cox, 74, of Bristol, Virginia, devoted father and husband, passed away on Friday, December 30, 2016 at his residence in Bristol, Virginia. He was born in Bristol, TN on May 8, 1942, a son of the late Matthew Butler and Chiquita Jackson... View Obituary & Service Information

The family of James B. Cox created this Life Tributes page to make it easy to share your memories.

James B. Cox, 74, of Bristol, Virginia, devoted father and husband,...

Send flowers to the Cox family.