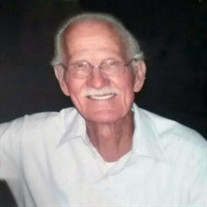 James Edward "Jim" Sanders, 89, of Bristol, VA passed away on Wednesday, June 3, 2020 at his residence. He was born in Big Stone Gap, VA on March 20, 1931, a son of the late Robert and Etta Sanders. In addition to his parents, he was preceded in death by two brothers, Robert J. Sanders and Woodrow Sanders; and four sisters, Maybrey Strahan, Beulah Ridgeway, Sonja Moore, and Hazel Abrams. He had lived in Bristol, VA since 1962. He was a veteran of the U.S. Army during the Korean War and was a member of the V.F.W. Jim was the owner/operator along with his brother, Jack, of Sanders Upholstery. He loved gardening and was an avid TN Vols fan. Jim is survived by his loving wife, Billie Jane Bryington Sanders, who this past May 31 has been married to for 65 years; three daughters, Kim Garland and her husband, Mark, of Bristol, TN, Pamela Lambert and her husband, Mike, of Kingsport, TN, and Lisa Brucker and her husband, Bob, of Jonesborough, TN; one brother, Jack Sanders and his wife, Bessie, of Bristol, TN; three sisters, Margaret Dickenson and Judy Poff and her husband, Fred, all of Big Stone Gap, VA, and Stella Richardson of Omaha, NE; two brothers-in-law, Les Ridgeway and Roy Moore; eight grandchildren, four great grandchildren; and several nieces and nephews. The family would like to express a special thank you to the V.A. Medical Center, Home Instead, and Kindred Hospice staff, especially Chaplain Jim, for all the love and care shown to Jim during his illness. The family will receive friends from 6:00 PM until 7:00 PM Friday, June 5, 2020 at Grace Point Church, Bristol, TN. The funeral service will follow at 7:00 PM Friday at the church with Mr. Barry Poff and Pastor Steve Sneed officiating. A private interment will be at the V.A. National Cemetery, Mountain Home, TN. In lieu of flowers, the family is requesting that donations be made to Grace Point Church for Orphans Worldwide, 1318 Shelby St., Bristol, TN 37620. Condolences for the family may be sent and viewed by visiting www.BlevinsCares.com. Mr. Sanders and his family are in the care of Blevins Funeral & Cremation Services.(276) 669-6141.

James Edward "Jim" Sanders, 89, of Bristol, VA passed away on Wednesday, June 3, 2020 at his residence. He was born in Big Stone Gap, VA on March 20, 1931, a son of the late Robert and Etta Sanders. In addition to his parents, he was preceded... View Obituary & Service Information

The family of James Edward "Jim" Sanders created this Life Tributes page to make it easy to share your memories.

James Edward &quot;Jim&quot; Sanders, 89, of Bristol, VA passed away on...

Send flowers to the Sanders family.