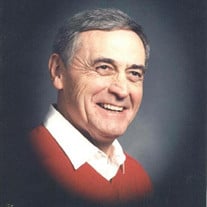 James Curtis Tillison, 92, of Bristol, Tennessee passed away to join his wife, Bootsie, Saturday, December 8, 2018 at Dominion Senior Living of Bristol. He was born in Washington County, VA on June 19, 1926, a son of the late Arthur J. Tillison and Sallie Fleenor Tillison. In addition to his parents, he was preceded in death by his wife of 61 years and 8 brothers and sisters. Curtis was a resident of Bristol for more than 70 years. He was a World War II veteran having served in the Army, where he received the Combat Infantry Badge, European African Middle Eastern Theater Ribbon, World War II Victory Medal and Germany Occupation Medal. He was a loving brother and devoted father, grandfather and great grandfather. Curtis graduated from Greendale High School and then worked at Monroe after the Army. The rest of his career he worked as an Engineer with Unisys for 30 years until he retired early at 55 years old and spent the next 30 years playing golf, square dancing and enjoying his grandchildren and great grandchildren. He was a member of Edgemont Presbyterian Church. Curtis is survived by three sons, Michael (Joan) Tillison of Gainesville, VA, Marcus Tillison of Bristol, TN, and Daniel (Shirley) Tillison of Bristol, TN; four grandchildren, twelve great grandchildren; two sisters, Eula (Richard) McCoy of Bristol and Ruby Rotenberry of Bristol; and numerous nieces and nephews. The family would like to express a special thank you to everyone at Dominion Senior Living of Bristol, TN for all the love and care shown to Curtis during his time living there. Services and Entombment will be conducted at 11:00 a.m., Saturday, December 29, 2018, at Forest Hills Memory Gardens Mausoleum with Rev. Aaron Bartmess officiating. Everyone is asked to meet at the cemetery at 10:50 a.m. Military honors will be provided by the United States Army National Honor Guard and the Disabled American Veterans Chapter 40. In lieu of flowers, the family is requesting that donations be made to Dementia Care Research at alzfdn.org Alzheimer's Foundation.

James Curtis Tillison, 92, of Bristol, Tennessee passed away to join his wife, Bootsie, Saturday, December 8, 2018 at Dominion Senior Living of Bristol. He was born in Washington County, VA on June 19, 1926, a son of the late Arthur J. Tillison... View Obituary & Service Information

The family of James Curtis Tillison created this Life Tributes page to make it easy to share your memories.

Send flowers to the Tillison family.