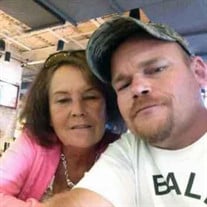 James "Jamie" J. Wright Jr., 47, of Bristol, VA went to heaven on Tuesday, June 22nd, 2021 in Johnston Memorial Hospital, Abingdon, VA following an extended illness. He was born in Elkton, MD on March 25th, 1974. James was preceded in death by his father, James Wright Sr.. Jamie and Vickie had been together for many years prior to his death, but they will always remain soul mates. Jamie was a U.S. Marine serving in the tail end of the Gulf War. After his service to his country, Jamie mastered his trade in carpentry. Jamie is survived by his wife, Vickie Josephine O'Dell of Bristol, VA; mother, Sally R. Heath-Wright of Greeneville, TN; two step-daughters, Sheila Rhodes of Haysi, VA and Tonya Glover and husband Rick of Leaf River, IL; one step-son, Donald O'Dell Jr. and wife Rachael of Newark, DE; two sisters; three brothers; ten grandchildren, (two of which he viewed more as sons) Jason Robinson and wife Jeri of Bristol, VA and Bret Robinson of Pensacola, FL; three great-grandchildren; and several nieces, nephews, cousins and extended family. Jamie will be missed by many and has touched so many lives. Til Valhalla. There will be a Celebration of Life service held at a later date. Condolences for the family may be sent and viewed by visiting www.BlevinsCares.com. Mr. Wright and his family are in the care of Blevins Funeral & Cremation Services, 417 Lee St., Bristol, VA 24201; ph.#: (276) 669-6141.

The family of James "Jamie" J. Wright created this Life Tributes page to make it easy to share your memories.

Send flowers to the Wright family.