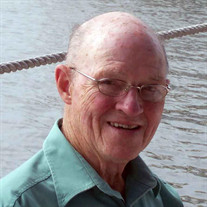 John P. Gibson, 89, of Bristol, VA passed away Monday, July 31, 2017 at Wellmont Hospice House. He was born at Lake Junaluska, NC on July 31, 1928, son of the late Herbert and Robbie Reeves Gibson. In addition to his parents, he is predeceased by his brother, Herbert Gibson, Jr. and his two sisters, Evelyn Gibson Hyatt and Carolyn Gibson Doyle. John attended Sylva Elementary and Sylva High School where he was president of his senior class and graduated in 1945. While attending Western Carolina Teachers College, John worked summers and weekends for Southern Railway as a telegraph operator. He graduated in 1949 and was employed as station agent for the railroad at Murphy, NC. He served in the United States Army for two years during the Korean War. After his service, he returned to Norfolk Southern Railway and worked on the railroad for over 50 years. He retired in 1993 as a National Account Manager. John married Martha Carpenter in 1965, and they celebrated over 51 years of marriage together. He was an avid traveler, and he and Martha traveled to all of the populated continents.He loved the game of golf, could sing a song for every occasion (and tell you what song was on the flip side), and will be remembered for his dry sense of humor and quick wit. John was an active member of State Street United Methodist Church where he served as the chairman or member of several committees (when he couldn't talk his way out of it). He was a member of the Kiwanis Club of Bristol and served as president and in other board positions. He was a past Lt. Governor of the Kiwanis Kentucky-Tennessee District. He volunteered throughout the community, including tutoring, serving as a Big Brother through the Big Brothers/ Big Sisters Organization, and volunteering two afternoons a week at Bristol Regional Medical Center as a wheelchair escort. John is survived by his wife, Martha Carpenter Gibson; and three daughters, Virginia Gibson Pratt, husband Skip and their son, John Preston Pratt of Bluffton, SC; Holly Gibson Coe, husband Blake, and their two sons, Joshua Blake Coe and Jacob Mitchell Coe of Ashburn, VA; and Robbie Gibson Whitehead, husband Wade, and their children, Jack Dorsey Whitehead and Grace Anne Whitehead of Roanoke, VA. He is obviously a really good guy and deserves to go to heaven, so, to whom it may concern, please keep this in mind. A Celebration of Life Service will be conducted at 3:00 p.m. on Friday, August 4, 2017 at State Street United Methodist Church in Bristol, VA with Reverend Jonathan Jonas and Dr. Mark Hicks officiating. A private inurnment will be conducted at a later date at Mountain View Cemetery in Bristol, VA. In lieu of flowers, the family is requesting that memorial donations be sent to State Street United Methodist Church, 300 W. Valley St., Bristol, VA 24201.

John P. Gibson, 89, of Bristol, VA passed away Monday, July 31, 2017 at Wellmont Hospice House. He was born at Lake Junaluska, NC on July 31, 1928, son of the late Herbert and Robbie Reeves Gibson. In addition to his parents, he is predeceased... View Obituary & Service Information

The family of John P. Gibson created this Life Tributes page to make it easy to share your memories.

Send flowers to the Gibson family.