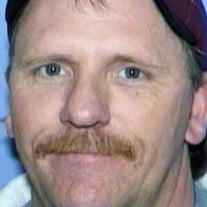 Johnny “John” Malcolm Ashley, our hero, was called home to Jesus on September 4, 2020 at the age of 63. He passed away surrounded by his loving family. John was born in Bristol, VA on September 3, 1957 to his father Paul Rufus Ashley and mother Bessie Irene Ashley. He was a former employee of Bristol Compressors Inc. John had a love for Bristol Baseball, metal detecting, Nascar and his family. Each summer he would spend most nights at Boyce Cox field with his family cheering on the Bristol team and eating hot dogs. He loved summer, sunshine, bluegrass music, his hometown Bristol and the history behind it. You could always find him watching Andy Griffith. Above all else, he loved the Lord and always put his faith in him. For all of his victories he gave God the glory and praised him in the hills and valleys. He knew God would walk with him through all of life’s journeys. He is preceded in death by his father, Paul. He is survived by his loving wife Angie Ashley and their son Josh Brod and wife Jessica, their daughter Megan Morris and husband Derek, his grandson Lincoln John Morris, his mother Irene, His 6 brothers and sisters; Ben Ashley, Neil Ashley and wife Kendra, Kay Spivey and husband Wayne, Anne Barry, Sandra Sullivan and husband Gary, Jill Matchett and husband Del, along with many wonderful nieces and nephews, his father-in-law Harvey George and many friends who have all followed him and prayed for him through his journey. John also leaves behind two dogs who he adored, Jazper and Shaggy as well as his cat Miko. John’s family would like to thank all of his prayer warriors over the past six years who have stood beside him throughout this battle. We have comfort in knowing his fight is over and his victory has been won. He is now waiting for us to join him. They would also like to give thanks to Cancer Treatment Centers of America in Newnan, GA for finding treatment to help John that allowed him to be with us as long as he was. He said to them, “Because of your little faith. For truly, I say to you, if you have faith like a grain of mustard seed, you will say to this mountain, ‘Move from here to there,’ and it will move, and nothing will be impossible for you.” (Matthew 17:20) A celebration of John’s life will be held at Shiloh Freewill Baptist Church on Wednesday September 9th with visitation from 5:00 pm-7:00 pm followed by a service honoring him officiated by pastor Greg Dingus. On Thursday September 10th the procession will begin at the church at 12:30PM and end at Eastern Heights cemetery in Bristol, TN with burial to follow. Pallbearers include Neil Ashley, Chris Barry, Joshua Brod, Bryan Lockner, Derek Morris and Gary Sullivan. Honorary pallbearers will be Ben Ashley and Kevin Schurtz. The family is asking for donations to offset medical bills in lieu of flowers. Condolences for the family may be sent and viewed by visiting www.BlevinsCares.com. Mr. Ashley and his family are in the care of Blevins Funeral & Cremation Services, 417 Lee Street Bristol, VA 24201; ph. #: (276-669-6141).

Johnny &#8220;John&#8221; Malcolm Ashley, our hero, was called home to Jesus on September 4, 2020 at the age of 63. He passed away surrounded by his loving family. John was born in Bristol, VA on September 3, 1957 to his father Paul Rufus Ashley... View Obituary & Service Information

The family of Johnny "John" Malcolm Ashley created this Life Tributes page to make it easy to share your memories.

Send flowers to the Ashley family.