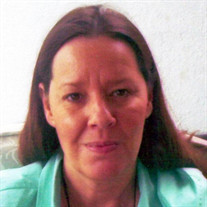 Judith Fuller, age 62, passed away on Friday, March 18, 2022. She was born on July 3, 1959 to the late Marvin Elwood Hurley and Della Yvonne Hurley. Judy was a loving wife, mother, grandmother, sister and aunt. She enjoyed her life mainly as a homemaker and raising her children. One of Judy's passions in life was listening and singing along to music with family and friends. She also enjoyed playing cards, Yahtzee and anything trivia related. When it came to television or reading she was always drawn to anything supernatural or haunted in nature. Judy was also blessed with the ability to express herself with words in the form of a letter, poem, short story or journal entry. Judy traveled in her younger years with her family as her father served in the Army. Out of all the places she was able to live while growing up her favorite was Japan. Along with her parents, Judy was preceded in death by her father in law John Marshall Fuller Sr., mother in law, Eula Jane Fuller; brothers in law: Chris Booher, Steven Fuller, Melvin Crane, Tommy Fouch and granddaughter Abigail Mumpower. Left to cherish her memory are her loving husband, William "Bill" Fuller; two daughters, Sara Mumpower and husband Tim Mumpower of Bristol VA and Tiffany Fuller; sister, Diana Fouch; brothers: Marvin Hurley and his wife Jackie Hurley of Bristol, VA and Tim Hurley and his wife Joy Hurley of Piney Flats, TN; granddaughters Alexis Stapleton, Karlie Mumpower and Scarlett Fuller and grandson Dominic Gilliam; several special nieces and nephews and very close friends. The family would like to express their sincere gratitude for the level of care received by the Ballad Health Hospice House. In addition much appreciation for Camelot Care Center in Kingsport, especially Jana Dobesova for her integral part in Judy's mental well-being. In lieu of flowers, the family requests donations be made to the Lighthouse of Prayer Christian Church in Bluff City, TN. A Gathering of Remembrance will be held on Friday, March 25, 2022 from 4:00 to 5:00 PM at Blevins Funeral Home. This is a time for friends and family to come together and share memories of Judy. Blevins Funeral Home has the honor of serving the Fuller family.

Judith Fuller, age 62, passed away on Friday, March 18, 2022. She was born on July 3, 1959 to the late Marvin Elwood Hurley and Della Yvonne Hurley. Judy was a loving wife, mother, grandmother, sister and aunt. She enjoyed her life mainly... View Obituary & Service Information

The family of Judith Ann Fuller created this Life Tributes page to make it easy to share your memories.

Send flowers to the Fuller family.