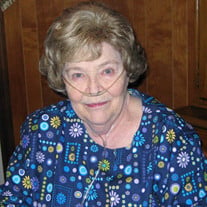 Judy C. Nunley, 72, of Bristol, Tennessee passed away Friday, July 8, 2016 in the Bristol Regional Medical Center, Bristol, Tennessee. She was born in Dickenson County, VA on March 14, 1944, a daughter of the late Buford and Ethel Burke. In addition to her parents, she was preceded in death by her husband Ernest T. Nunley; and two brothers, Samuel and George Burke. She was a resident of Bristol, VA prior to moving to Lavender Lane Apartments on Bluff City Hwy. She was a member of Mt. Lebanon Baptist Church. She was a loving and a devoted mother, grandmother, and great grandmother. Judy was the biscuit cook at Hardees on Lee Highway before she was a Snack Bar Manager with Virginia Intermont College. She enjoyed playing bingo at Hardees and McDonalds. Judy is survived by her two sons, Ernest Lynn Nunley and his wife Kristy and James Hall and his wife Kim; two grandchildren, Christopher and Leah Hall; two step-grandchildren, Jessica and Josh; along with three great-grandchildren; three sisters, Jeanette Sutherland, Nancy Morris, Barbara Booher and her husband Glen; a brother, Jim Burke and his wife Trula; and numerous nieces and nephews. The family would like to express a special thank you to the Doctors and staff of 4West at Bristol Regional Medical Center for all the love and care shown to Judy during her illness. The celebration of life service for Judy will be held privately at a later date. In lieu of flowers, the family is requesting that donations be made to Living Faith Television, 8594 Hidden Valley Rd, Abingdon, VA 24210.

Judy C. Nunley, 72, of Bristol, Tennessee passed away Friday, July 8, 2016 in the Bristol Regional Medical Center, Bristol, Tennessee. She was born in Dickenson County, VA on March 14, 1944, a daughter of the late Buford and Ethel Burke. In... View Obituary & Service Information

The family of Judy C. Nunley created this Life Tributes page to make it easy to share your memories.

Send flowers to the Nunley family.