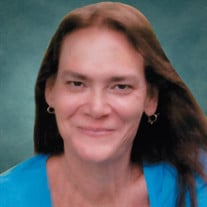 Kathryn "Kathy" Marie Bernard Ollis Durham, 56, of Bluff City, TN went home to be with the Lord after a long battle with cancer on Saturday, October 20, 2018. She was the daughter of Clara Anderson and step-father, Andy, of Bristol, TN. She... View Obituary & Service Information

The family of Kathryn "Kathy" Marie Bernard Ollis Durham created this Life Tributes page to make it easy to share your memories.