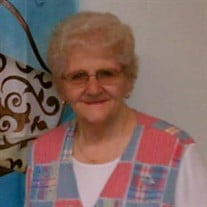 Lois Mae Stine, 86, of Bristol, VA passed away Saturday, September 12, 2015 in Johnston Memorial Hospital, Abingdon, VA. She was born in Washington County, VA on August 3, 1929, a daughter of the late Charles Audry Booher and Marylee Bertha Newton Booher. In addition to her parents, she was preceded in death by one son, Joseph Conway Swiney and two sisters. She was a resident of the Bristol area her entire life. She attended First Baptist of Blountville, TN. She also worked as a nurses aide for many years at Bristol Memorial Hospital. She loved to play bingo and spend time with her family and many friends. She lived the last years of her life as a resident of the Thomas Jefferson Apartments where she had previously attended school. The family wishes to express a special "Thank You" to her good friend Sue Walden. She is survived by her loving husband, Doug Stine, Sr.; three sons, Doug Stine, Jr. and wife, Lisa of Bristol, TN, Gary Stine and wife, Dorothy of Bristol, VA, and Mark Stine and wife, Jennifer of Bristol, VA; daughter-in-law, Diane Swiney of Richmond, VA; seven grandchildren; five great grandchildren; two brothers, Emory Booher and Worley Booher; several nieces and nephews. The family will receive friends from 6:00 pm until 8:00 pm Monday, September 14, 2015 at Blevins Funeral & Cremation Services. The funeral service will be conducted at 8:00 pm Monday, September 14, 2015, at Blevins Funeral & Cremation Services. The committal service and interment will be conducted at 1:00 pm, Tuesday, September 15, 2015 in Odum Cemetery. Pallbearers will be grandchildren. Everyone is asked to meet at the cemetery at 12:45 pm Tuesday. In lieu of flowers, the family is requesting that donations be made to the charity of their choosing in memory of Mrs. Stine. Condolences for the family may be sent and viewed by visiting www.BlevinsCares.com. Mrs. Stine and her family are in the care of Blevins Funeral & Cremation Services.(276) 669-6141.

The family of Lois Mae Stine created this Life Tributes page to make it easy to share your memories.