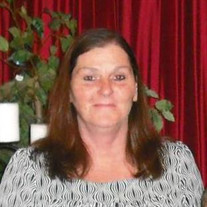 Loretta Jane Doss Cato Loretta Jane Doss Cato, 56, of Bristol, Virginia, went to be with her Lord on Friday, January 29, 2016 at the Bristol Regional Medical Center, Bristol, Tennessee. She was born in Bristol, VA on March 30, 1959, a daughter of the late James G. Doss and Winnie Jones Doss. In addition to her parents, she was preceded in death by two sisters, Brenda Sexton, and Vickie Hall. Loretta was a loving and a devoted mother, grandmother, sister and aunt. Loretta loved taking care of her grandchildren. Loretta is survived by her, daughter, Amanda Greear, and her husband Matt; a son, Jason Strong; four grandchildren, Dallas, Logan, Katelyn, and Kylie; four sisters, Eloise Little, and her husband, Doug, Ann Beavers, Teresa Doss, and her husband Ronnie, and Kathy Cody, and her husband Kim; four brothers, Bob Doss, J.D. Doss, and his wife Alice, Billy Doss and his wife Mary, and Ronnie Doss; along with numerous nieces and nephews. The family would like to express a special thank you to Bristol Regional Medical Center, ICU#2, and the staff of 2 West for all the love and care shown to Loretta during her illness. The family will receive friends from 6:00 pm until 7:45 pm Monday, February 1, 2016 at Blevins Funeral & Cremation Services, 417 Lee Street, Bristol, VA 24201. The funeral service will be conducted at 8:00 pm, Monday, February 1, 2016, at Blevins Funeral & Cremation Services, with Minister Harold Dowell, Pastor John Love, and Pastor Brad Hatfield officiating. In lieu of flowers, the family is requesting that donations be made to Vanderbilt Childrens Hospital, 2200 Childrens Way, Nashville, TN 37232.

The family of Loretta Jane Doss Cato created this Life Tributes page to make it easy to share your memories.

Send flowers to the Cato family.