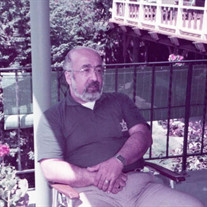 Luis Fernando Torres, 78, passed away peacefully during the evening hours of Tuesday (January 19, 2021) following an illness. Luis was born on November 18, 1942 in San Lorenzo, Puerto Rico to the late Antonio & Aurora (Ortiz) Torres. Luis unselfishly served our country in the United States Army. He lived most of his live in the Seattle, WA area. He retired from King County Metro after 38 years of dedicated service. He enjoyed watching tv, spending time with his family, and was an avid animal lover who supported various animal organizations. In addition to his parents, Luis was preceded in death by his brother, Juan Torres; and sister, Lidia Torres Pinella. Left to cherish his memory are his beloved wife of 25 years, Riana Ruth Torres; two sons, Richard Torres & wife Christina and David Torres; four grandchildren, Zachary Torres & wife Jocelyn, Bella Torres, Cienna Torres, and Natasha Gendron; two step-grandchildren, Nicole Troutman and Jackie Cooper; two great grandchildren, Asher Lee Torres and Silas Torres; two nieces, four nephews, and a host of friends. Luis will be laid to rest at Tahoma National Cemetery in Kent, WA at a later date. In lieu of flowers the family requests that memorial contributions be sent to Old Dog Haven (621 WA-9 Lake Stevens, WA 98258; www.olddoghaven.org). The family would like to extend a special thank you to Caris Hospice, Martha Toro, and neighbor, John Dorn for all the loving care that was both given and shown to Luis during his time of need. Online condolences may be made to the Torres family at www.blevinscares.com. Blevins Funeral Home and Cremation Services has the honor of serving the Torres family.

The family of Luis Fernando Torres created this Life Tributes page to make it easy to share your memories.

Luis Fernando Torres, 78, passed away peacefully during the evening...

Send flowers to the Torres family.