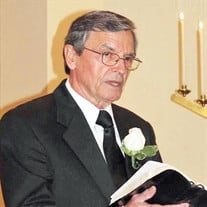 Luke Emerson Martin Jr., age 94, went to heaven on Sunday, March 13, 2022. Luke was born on December 16, 1927, in Kingsport, TN to the late Luke Martin Sr. and Eula Martin. Along with his parents, Luke is preceded in death by his three sisters. Left to cherish his memory are his loving wife of sixty-eight years, Flo Martin; daughter, Paula Howington (Larry Howington); two sons: Tim Martin (Melinda Martin) and Joel Martin; eight grandchildren: Jennifer Drumright, Chris Howington (Holly), Stephanie Hinson (Paul), Kim Weaver (Robert), Rebecca Kovach (Chris), Baker Martin (Abbey), Baxter Martin, Brooke Martin; twelve great grandchildren; brother, Stanley Martin; several nieces and nephews and a host of friends. Luke obtained his Electrical Engineering degree from the University of Tennessee, Knoxville when he answered the call to Christian ministry and then obtained his Master of Divinity degree at Southwestern Theological Seminary in Ft. Worth, TX. Upon completing his seminary degree, he pastored Pond Grove Baptist, Rockwood, TN, Mt. Lebanon Baptist, Maryville TN, and Indian Springs Baptist, Kingsport, TN, before retiring from Midway Baptist Church in Bristol, VA. Luke enjoyed doing interim and supply pastoring in retirement. While his accomplishments were many, he would be the first to say that it is not what he did on this earth that matters but what his Savior did for him. Luke was truly called to serve others for the Lord and enjoyed it. A visitation will be held on Wednesday, March 16, 2022, beginning at 11:00 AM at Midway Baptist Church. A service will follow beginning at noon. A committal service will be held following the service at Forest Hills Memory Gardens in Abingdon, VA. In lieu of flowers the family requests donations be made to Midway Baptist Church or the Alzheimer's Foundation of America. The family would like to extend a special thank you to the staff of Bristol Regional Medical Center 4 West, Dr. Patrick, and the staff at the Memory Care in Bristol, VA for the excellent care provided to Luke during his time of need. Online condolences may be made to the Martin family at www.blevinscares.com. Blevins Funeral Home has the honor of serving the Martin family.

Luke Emerson Martin Jr., age 94, went to heaven on Sunday, March 13, 2022. Luke was born on December 16, 1927, in Kingsport, TN to the late Luke Martin Sr. and Eula Martin. Along with his parents, Luke is preceded in death by his three sisters.... View Obituary & Service Information

The family of Luke Emerson Martin Jr. created this Life Tributes page to make it easy to share your memories.

Send flowers to the Martin family.