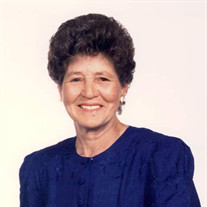 Lula Juanita Osborne Barrett, 85, of Blountville, Tennessee passed into the arms of Jesus on Monday, February 2, 2015. She was born in Welch, WV on October 18, 1929, a daughter of the late Arthur and Martha Baumgardner Osborne. In addition... View Obituary & Service Information

The family of Lula Juanita Barrett created this Life Tributes page to make it easy to share your memories.

Send flowers to the Barrett family.