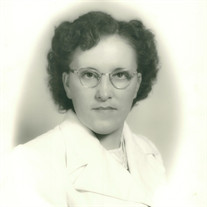 Margaret L. Johnson, 86, of Bristol, Virginia passed away Wednesday, June 19, 2019 at Abingdon Health and Rehabilitation Center.. She was born in Abingdon, VA on May 17, 1933, a daughter of the late Estil and Frances Lester Lewis. In addition... View Obituary & Service Information

The family of Margaret L. Johnson created this Life Tributes page to make it easy to share your memories.

Send flowers to the Johnson family.