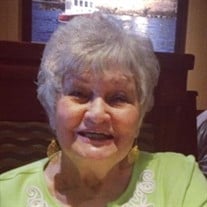 Marian Latham Price Marian Latham Price, 81, of Bristol, Tennessee passed away Friday, September 2, 2016 in the Bristol Regional Medical Center Hospice House, Bristol, TN. She was born in Abingdon, VA on June 27, 1935, a daughter of the late Clarence "Bud" and Florida Houser Latham. In addition to her parents, she was preceded in death by husband, Benjamin Franklin Price; two sisters, Sarah Eula Latham Reed, and Virginia Sells; a nephew, Roger Sells; and her dog, Daisy. She was a resident of Bristol, TN and had worked at Bristol Compressors for over 30 years. Marian was a loving and a devoted wife, mother, grandmother, and aunt. Marian is survived by her son, Gary L. Price of Bristol, TN; grandchildren, Christina Price and Justin Price; nephews, Wayne Sells and his wife Dixie, and Darrell Reed; two nieces, Sherry Reed Smith and her husband James, and Jeannie Haga and her husband Robert; three very special friends, Betty Williams, Betty Wilson, and Sonja Moretz. The family would like to express a special thank you to all the staff at the Hospice House for all the love and care shown to Marian during her illness. The family will receive friends from 6:00 to 7:00P.M., on Monday, September 5, 2016 at Blevins Funeral and Cremation Services, 417 Lee Street, Bristol, VA 24201. A celebration of Marians life will follow at 7:00P.M. with Bro. Vann Seal officiating. In lieu of flowers, the family is requesting that donations be made to Sullivan County Animal Shelter, 380 Massengill Road, Blountville, TN 37617.

The family of Marian Maxine Latham Price created this Life Tributes page to make it easy to share your memories.