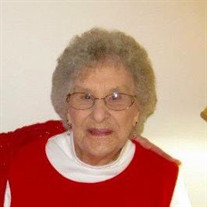 Martha Alice Hopkins Davidson ,89, of Bristol, Tennessee passed away Monday, March 21, 2016 Holston Manor Nursing Home, Kingsport, TN, following an extended illness. She was born in Bristol, VA on May 10, 1926, a daughter of the late Charles Preston Hopkins and Susan Frances Morrell Hopkins. In addition to her parents, she was preceded in death by her husband, Herbert Jackson Davidson, Sr. a brother, and two sisters. She was a lifelong resident of Bristol, TN. She was a member of Saint Luke Methodist Church, Bristol, VA. Martha retired as a Bookkeeper with Minor Pharmacy. Martha is survived by her daughter, Terry Davidson of Abingdon, VA; a son, Herbert "Jack" Davidson Jr. and his wife Lisa of Bristol, TN; an adopted daughter, Rhonda Duncan; special niece Tina Worley; and several other nieces and nephews. The family would like to express a special thank you to the entire staff at Holston Manor Nursing Home for all the love and care shown to Martha during her illness. The family will receive friends from 5:30 to 7:00 P.M. Wednesday, March 23, 2016 at Blevins Funeral and Cremation Services, 417 Lee Street, Bristol, VA. where a service will follow at 7:00 P.M. with Pastor Jeremy McMillan officiating. The committal service and interment will be conducted at 11:00 A.M., March 24, 2016, in Glenwood Cemetery, Bristol, TN. Pallbearers will be her nephews.

The family of Martha Alice Hopkins Davidson created this Life Tributes page to make it easy to share your memories.