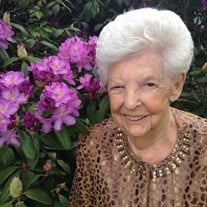 Martha Tate Williams, 80, of Bristol, VA passed away Wednesday, September 21, 2016 at Grace Healthcare in Abingdon, VA. She was born in Washington County, VA on April 22, 1936, a daughter of the late William H. and Glenna Almany Tate. In addition... View Obituary & Service Information

The family of Martha Tate Williams created this Life Tributes page to make it easy to share your memories.

Send flowers to the Williams family.